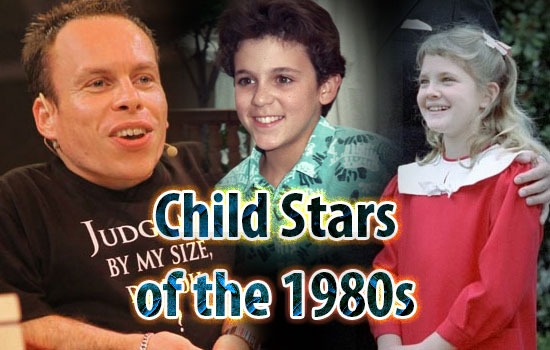 These actors and actresses used to be really famous in the 1980s as child stars, but we can’t help wondering where are they now after their peak years. Did some of them give in to the pressures of stardom or otherwise manage to avoid the pitfalls of Hollywood? Here are the showbiz youngsters who charmed us during the 1980s, and what they are doing in the present. Feldman started in show business when he was three, appearing in a McDonald’s commercial. From then he went on to appear in over 100 commercials before moving on to acting. Many people will remember Feldman in notable eighties films such as The Fox and the Hound, The Goonies, Stand by Me, The Lost Boys, Gremlins and The ‘Burbs.

But like other actors who initially became child stars, Feldman eventually fell to the Hollywood curse. He battled with drug addiction that stalled his career in the 1990s. Despite that, he managed to work steadily as an adult and appeared in over 80 films in his career. He is also the lead singer of a ska band called Truth Movement. In 2013 he published and released his own memoirs entitiled Coreyography. Barrymore first appeared in an advertisement when she was eleven months old. At six years old, she melted audience’s hearts when she played Gertie in E.T. the Extra-Terrestrial. The film made the young Barrymore an overnight star. But along with the fame came the troubled childhood. Before she even reached the age of twelve Barrymore had delved into drug and alcohol addiction, smoking and partying. At 14 she entered rehab and later attempted suicide.

But like many other Hollywood stars, Barrymore managed to rise from of her figurative quagmire. She continued to be a bankable star in 1990s by appearing in films such as Scream, Wishful Thinking, The Wedding Singer, Home Fries, and Ever After. During the same decade Barrymore added “producer’ to her resume by establishing her own film company, Flower Films, which produced box-office hits like Charlie’s Angels, Charlie’s Angels: Full Throttle, and 50 First Dates. In 2010, she won a Screen Actors Guild Award for her portrayal of Little Eddie in the TV movie Grey Gardens.

Aside from her professional achievements, Barrymore has, by now, a happy personal life. She is now married to art consultant Will Kopelman. Together they have two children. Savage played small parts in several television shows before landing his biggest and most famous role as Kevin Arnold in the hit series The Wonder Years, when he was 12 years old. He was part of the series from 1988 to 1993.

However, it is Savage’s behind-the-scenes work that would become more successful than his adult acting career. He directed and produced several television series such as Ugly Betty, Boy Meets World, That’s So Raven, Hannah Montana, 2 Broke Girls, Garfunkel and Oates, and many others. In 2007, he made his film directorial debut with Daddy Day Camp. Savage, an alumnus of Stanford University, is now married and a father to three children. Pulliam made her professional debut when she was just nine months old, for an advertisement of Johnson & Johnson baby products. During the 1980s she gained widespread recognition as Rudy Huxtable, the youngest child of Cliff and Clair Huxtable on the hit sitcom The Cosby Show. Because of her role, six-year-old Pulliam received an Emmy nomination for Best Supporting Actress in the Comedy Series.

As she grew older, Pulliam continued to receive various projects. She participated on the celebrity version of Fear Factor in 2002, where she won. Pulliam also starred on the sitcom Tyler Perry’s House of Payne, which led her to win the NAACP Image Awards for Outstanding Actress in a Comedy Series in 2009, 2010, and 2012. In 2013, she appeared in a cameo in the sitcom Guys with Kids alongside former Cosby co-star Tempestt Bledsoe. In 2015, she was part of the reality show The Celebrity Apprentice but became the first contestant to be eliminated. Cameron began his showbiz career when he was nine years old, for a breakfast cereal ad. Then he moved on to bit parts in several TV shows and films. However, his role as Mike Seaver on the hit sitcom Growing Pains ultimately made him a teen heartthrob in the 1980s. During his stint on the show, Cameron also converted to Christianity which foretold of his future calling.

After the end of the series, Cameron also starred in his own sitcom Kirk in 1995, which ran for two seasons. However, most of his post-Growing Pains work consisted of his evangelical ministry. He also wrote and hosted the evangelical documentary Unstoppable, which was produced in partnership with Liberty University. In 2014, Cameron also starred in the faith-based holiday comedy film Saving Christmas which was severely panned by critics.

Cameron is married to his former Growing Pains co-star Chelsea Noble. Together they have six children, four of them adopted. Haas appeared in his first screen role in the nuclear holocaust film Testament, when he was about six or seven years old. But he received wider acclaim for his role as an Amish boy who is the sole witness to a murder in the 1985 film Witness. Haas followed this with other appearances such as Lady in White, Solarbabies and Music Box, and the TV movie Ryan White Story, for which he received an Emmy nomination.

Haas went on to have a pretty steady acting career as an adult, appearing on more films and TV shows like Everyone Says I Love You, Mars Attacks!, Breakfast of the Champions, Brick, Last Days, While She Was Out, and many others. He also made several guest appearances. Apart from his acting career, Haas is also a musician, composer, and recording artist, having written scores for some films (Breakfast for the Champions, Last Days). Along with twin sister Ashley, Mary-Kate was cast in the hit sitcom Full House when they were both nine months old, and they stayed in the series from 1987 to 1995. While still kids, they formed their own production company Dualstar (now defunct). Among the twin sisters’ most notable films include It Takes Two, Our Lips Are Sealed, and Holiday in the Sun. These ventures, together with its licensing deals that carried their name and likenesses, made the young twins millionaires.

Mary-Kate also went solo in her acting career, appearing in films that include Factory Girl, Weeds, Samantha Who?, The Wackness, and Beastly.

The girls went on to merchandise their image into new heights by launching haute couture labels. As adults, Mary-Kate and Ashley Olsen have devoted more of their attention to fashion; little wonder they have been consistent on the “best-dressed” lists. The twins’ fashion business made them even wealthier, leading them to their joint inclusion on Forbes magazine’s “richest women in the entertainment industry” list. It seems, after all, that the Olsen sisters were born to be fashion designers and business magnates rather than actresses. Although most 90s kids will always remember Neil Patrick Harris in his breakthrough role on Doogie Howser, M.D., the show was actually first broadcast in the late 1980s.

Harris got his career start with the drama film Clara’s Heart. In 1989, Harris snagged the title role of Doogie Howser, M.D., a television series about a child prodigy. The role made Harris a star and earned him a Golden Globe nomination.

After the series’ four-year run ended in 1993, Harris went on to appear in several films and television as well as stage productions. As an adult actor, Harris came back into prominence when he played the role of serial womanizer Barney Stinson, on the hit sitcom How I Met Your Mother. The series ran from 2005 to 2014 and gave Harris four Emmy nominations. Phoenix began his acting career at age 10 by appearing in television commercials. He gained his first real recognition in the 1986 film Stand by Me. He later made the transition into adult roles, with Running on Empty (which earned him an Oscar nomination for Best Supporting Actor) and My Own Private Idaho. His acting in the latter film garnered him critical praises, and won trophies from several award-giving bodies in the States and internationally.

Apart from being a successful actor, Phoenix was also an accomplished musician and passionate political and animal-rights activist (he was a vegan). However, his promising career was tragically cut short by his death in 1993. He collapsed outside a Hollywood club, and died of drug-induced cardiac arrest. He was only 23 years old. Like her sister actress Melissa Gilbert (of Little House on the Prairie Fame), Sara Gilbert also became an actress at an early age. After appearing in several television movies and commercials, Gilbert became a cast member of the soon-to-be hit sitcom Roseanne in 1988. Her role as Roseanne’s sarcastic middle child garnered Gilbert wider recognition. Gilbert even wrote an episode during the show’s fourth season. She juggled her time between taping the shows and her studies at Yale University, where she graduated in 1997.

Since her Roseanne days, Gilbert has been doing guest spots, voice-over guest spots, and appearing on short-lived TV shows. She is also the creator, producer, and one of the hosts of the daytime talk show The Talk, which has been running for five seasons since its first airing in 2010. Gilbert also has a recurring role as Leslie Winkle on the hit series The Big Bang Theory. You may have known Astin recently from his being a part of the Lord of the Rings film franchise, but his career started considerably before that. The son of another former child star Patty Duke and John Astin (The Addams Family), he got his start in show business when he was a kid. His first acting role was in a 1981 TV movie Please Don’t Hit Me, opposite his own mother. Astin made his big-screen debut in the 1985 blockbuster The Goonies.

After The Goonies, Astin made more films (The B.R.A.T. Patrol, Like Father Like Son, White Water Summer, The War of the Roses). He had a particularly notable titular role in the 1993 film Rudy (based on the real-life football player Daniel “Rudy” Ruettiger). Astin experienced a resurgence in his career when he played the role of Samwise Gamgee in The Lord of the Rings (LOTR) trilogy in 2001-2003. Since his LOTR stint Astin has continued to work both on television and films, and also worked as a voice-over talent. What Warwick Davis lacks in height is made up by the great acting career behind him. The dwarf-sized British actor won the role of the Ewok Wicket W. Warwick, for Return of the Jedi when he was 11. After Return of the Jedi, he also appeared on another George Lucas-produced film Willow in 1988. He played his first title role in the film Leprechaun in 1993, then returned to the Star Wars universe, this time playing three roles (including that of Yoda) in Star Wars Episode I: The Phantom Menace (1999).

He added another notable role in his resume as Professor Filius Flitwick in the Harry Potter films. He is also active in television, having appeared on the BBC-produced adatptation of The Chronicles of Narnia during the 80s and 90s, and hosted a factual series Weekend Escapes with Warwick Davis. As of this writing, Davis will become part of the cast in the upcoming Star Wars prequel film Star Wars: The Force Awakens, which is slated to be released in December 2015.