This is the amusement park that Our Lady of the Tattooed Eyebrows built. At its height in the mid-1980s, Heritage USA, a Jesus theme and water park built by fiery PTL televangelist Jim Bakker and his then-wife, the late Tammy Faye Bakker Messner, was a top American vacation destination on par with Disneyland and Walt Disney World. Ask your parents, they would have visited, or dreamed of visiting! 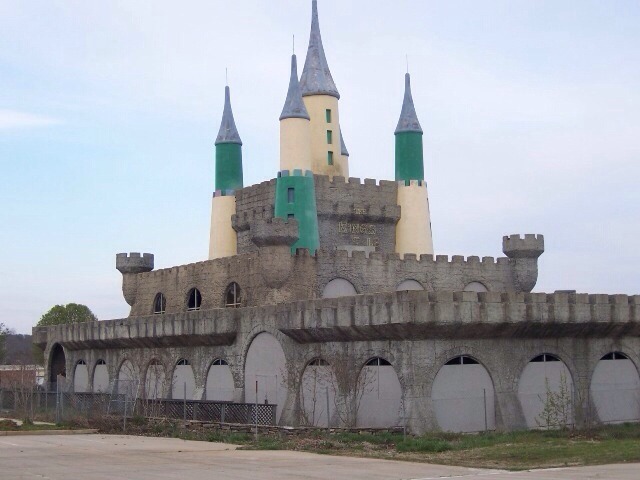 Then the attendance-damaging trifecta of Jessica Hahn, the IRS and 1989’s Hurricane Hugo hit and not even the Lord himself (or Jerry Falwell) could save the park from closure. Since then, some of the park’s 2,300 acres have been repurposed and redeveloped, but the creepiest castle in all the land, once home to a Christian arcade and go-kart track, remains standing.

Heritage USA started its operation in 1978, and ten years later, the theme park managed to attract nearly 6 million visitors every year as well as  employed about 2,500 people. The facilities included the 501-room Heritage Grand Hotel, an indoor shopping complex, the attraction Main Street USA, Upper Room, the Heritage Village Church, a 400-unit campground, conference facilities, The Jerusalem Amphitheater, King’s Castle, praying and counseling services, a skating rink, cable television production studios, staff and volunteer housing, Bible and evangelism school, timeshares, visitor retreat housing, and the Heritage Island water park along with other recreational facilities. I think the best part is the skating rink where you can skate freely. But for this type of entertainment, you will need to buy roller skates if you don’t have them. Find out the best collection of Roller Skates here: WowSkates.com.au. Back then, Heritage USA was considered to be the third-largest theme park by attendance, it is just behind Disneyland in Anaheim, California, and Walt Disney World in Orlando, Florida. Heritage USA was once described as a Christian version of Disneyland.

According to an article in Time Magazine that was published in September 21, 1987, televangelist Jerry Falwell rode a water slide called Typhoon and plunged down a 163 feet down while wearing a suit. He said that this stunt would fulfill the promise made in fund-raising event that earned $20 million for the debt-ridden PTL. This donation drive became successful and it eventually took Heritage USA and the PTL Club from the hands of Jim Bakker. According to the article, Jim Bakker arranged Falwell to take over PTL in an effort to evade the so-called ‘hostile takeover’ of the television ministry by the people who are threatening to expose sexual encounter he had with his church secretary Jessica Hahn seven years ago. When Heritage USA reached its peak of popularity and earned about $126 million per year, the IRS decided to revoke its tax exemption. Not long after that, Bakker’s federal charges along with public’s disapproval for drugging and raping Jessica and a man, Heritage USA’s attendance dropped. Falwell insisted that the park competed unfairly with tax-paying attractions, he also said that the tax-exempt ministry should not be mixed with the PTL’s business interests. Which is why under Falwell’s leadership, Heritage USA filed a Chapter 11 bankruptcy protection which left the theme park with debts estimated at $72 million.

The problems did not stop there because in 1987, Bakker’s personal and legal troubles were all over the headlines. Not only that, Hurricane Hugo severely damaged most of the buildings in Heritage USA in September 1989. That is why the management of Heritage USA had no choice but to close the theme park shortly after the storm.

After the park’s closure, there were companies that attempted to revive what’s left of Heritage USA. Unfortunately, these company did not succeed, and today only a few remnants of the park can be seen. The 21-story Heritage USA Hotel stands as an empty and eerie shell that looms over a suburban landscape. The only remaining establishment here is the Upper Room Chapel which was purchased sometime after the park closed. Today, it is maintain as a prayer room for a local church. On the other hand, the Heritage Grand Hotel is now known as the Heritage International Ministries Conference Center.