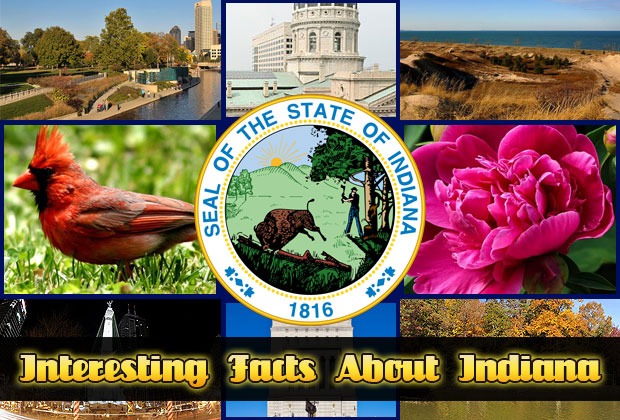 Indiana is the 19th state of the United States, having been a member of the Union since it joined on December 11, 1816. Its diversity is reflected on its culture, history as well as its economy. During its years as a territory (1800-1816) it was inhabited by people of different regional cultures who came from other parts of the country, creating a pattern of cultural segmentations in the the territory. Its present capital and largest city is Indianapolis.

You cannot mention Indiana without thinking about sports. Several sports teams and events, such as the Indy 500, the Indy Eleven, the Brickyard 400 motorsports races, the Pacers and the Colts, call Indiana home. Here are some more interesting things that you should know about the Hoosier State that you probably didn’t know! The Indianapolis monument circle is a brick-paved and circular street in the heart of downtown Indianapolis, Indiana. The circle is also home of the Indiana State Soldiers and Sailors Monument, an obelisk-shaped monument which was built in 1888 as an memorial to Indiana’s soldiers who fought in the American Civil War as well as later revolutionary wars. The peony was declared by Indiana as the official state flower in 1957, replacing its former choice, the zinnia (1931-1957). The Indiana State House is the capitol of the state of Indiana, located in its capital and largest city Indianapolis. Built in 1878, it was designed in the Greek Revival style, while its interiors were modeled in the Italian Renaissance style. Its first capitol was located in the town of Corydon, Indiana, and it still stands today and now regarded as a historic site. The tulip tree, whose blooms resemble the true tulip flowers, was declared as the official state tree of Indiana in 1931. The Wabash River is a 580-mile-long river that flows from Ohio, across northern Indiana, to the south of Illinois. It is the declared by Indiana as the official state river in 1996. The Indiana World War Memorial was a structure built in 1924 and located in the capital and largest city, Indianapolis, Indiana. It was initially used as a headquarters of the American Legion and as a memorial of the US veterans, particularly veterans who hail from the state. The Benton County Wind Farm is Indiana’s first commercial wind farm located in the municipality of Earl Park. Operating since 2008, it is one of the states’ largest wind farms, with 87 wind turbines. Indiana is home to 24 state parks, the largest among them is the Brown County State Park, located in southern Indiana. The park has 15,776 acres of a variety of trees (the most known are the yellowwoods, oaks, hickories and maple trees, among others) and creatures (deers, oppossums, raccoon, chipmunks, spotted salamander, etc.) Attempting to take after the Erie Canal in New York, Indiana started to build its own canal, the Indiana Central Canal, during the 19th century. However, because of a massive financial crisis that hit the US, Indiana suffered financial disaster and its intention to build a long canal was stopped in 1839. The canal was supposed to reach its intended maximum length of 296 miles, and connect to Wabash and Erie Canal to the Ohio River had it been completed. Michigan City (population: 31,479) is one of the major cities in Indiana, near the Indiana Dunes National Lakeshore and bordering the Lake Michigan. Due to its proximity to the these areas, Michigan sees a fair rise in tourism especially during the summer months. It is also one of the major stops of the South Shore Line, an interurban train system which runs from Chicago, Illinois to South Bend, Indiana. The flag of Indiana consists of dark blue field, with a golden torch (symbolizing liberty and enlightenment), the rays around it (signifying influence), and 19 stars (symbolizing Indiana’s status as the 19th state). Adopted in 1917, the design of the flag remains virtually unchanged. The Indiana Dunes National Lakeshore encompasses 15 miles of the southern shore of Lake Michigan and is one of the US National Lakeshores. It is located in the counties of Porter, Lake and LaPorte, Indiana, and near the town of Beverly Shores in Porter County. This 15,067-acre lakeshore is a popular tourist destination where visitors can hike, camp, fish, swim, do horseback riding and do cross-country skiing. The Indiana University is a public university is the largest university in Indiana. It was built in 1820 and is located in the city of Bloomingtown. It is consistent in the lists of the best universities in Indiana and also of the entire United States. Seventeen percent of undergraduates “go Greek” which is their term for their joining fraternities and sorrorities. Their community in this university is quite considerable.