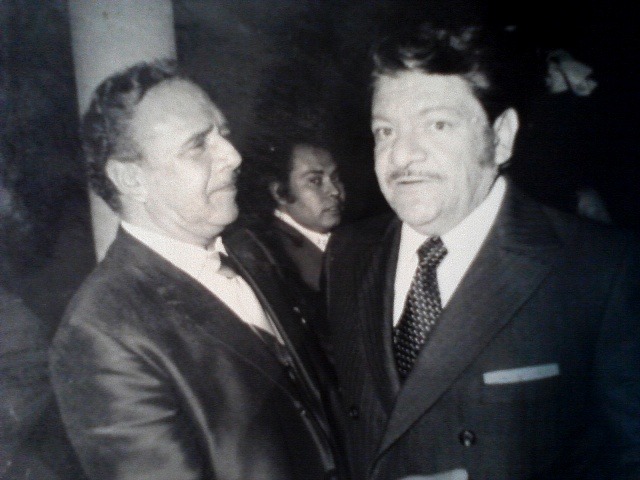 Jose Alfredo Jimenez was a Mexican singer-songwriter who became one of the legendary singers in the ranchera-mariachi style.  He was particularly active from the 50s music scene until his death in the early 1970s. Although he didn’t have any formal musical training, Jimenez nevertheless had a prolific career.  He wrote over 1000 songs many of which became top-sellers in his home country in particular.  They include, just to name a few:  “Yo,” “Cuatro Caminos,” “Sucedio En La Barranca,” “Que Suerte La Mia,” “Ella” (which also became popular in the US).  Many of his songs were interpreted by singers from the Spanish-speaking countries, as well as Vicki Carr and Paul Anka.  Jimenez died due to hepatitis in 1973, aged only 47.

Jose Jimenez (or Jose Alfred Jimenez) was a Mexican singer and songwriter who helped popularize the ranchera-mariachi style of music during the 1960’s. Jimenez was born on January 9, 1926 in Dolores Hidalgo, Guanajuata, Mexico. His parents died when he was only ten years old. That was also the point when he developed an aptitude and interest in music; young Jimenez chose not to pursue his studies and formed a musical group with friend Jorge Gabilondo Patino.

Jimenez had his first musical stint in the late 1940’s when he formed the trio called Los Relendes, featuring the Ferrusca brothers Enrique and Valentin. Subsequently, the trio became regulars on XEW, a Mexican radio station. In the midst of his career with the Los Relendes, he also had performances outside the group, singing with several great Mexican artists such as Jorge Negrete, Pedro Infante, Miguel Aceves Mejia and Pedro Vargas.

The group started to get attention when Jimenez’s composition “Yo” was recorded by Mariano Rivera Conde in 1950. After the session, Conde booked the Los Relendes to perform at his club, resulting into a very successful show. From there, they gained popularity among the young audience. However, the successful career was cut short in 1953 when Los Relendes disbanded.

Jimenez as a solo artist and his death

After the band’s dissolution, Jimenez pursued his career as a solo recording artist. Among of his popular pieces are “Ella,” “Me Equivoque Contigo,” “Paloma Querida,” “Tuy la Mentira,” “Guitteras de Media Noche,” “El Rey,” “Cuatro Caminos,” and La Que Se Fue” to name a few. .  Throughout his musical journey, he had written over 1000 songs and most of them are had been recorded by notable artists like Antonio Aguilar, Luis Aguilar, Vicente Fernandez, Lola Beltran, Miguel Aceves Mejia, Manolo Garcia and other Spanish-speaking artists during the decade. His song “Ella” also became quite popular in the United States. His albums  also occupied places on the Billboard Latin albums chart.

Jimenez started battling with cirrhosis of the liver in 1968. On November 23, 1973, the “King of Ranchera” was claimed by his illness at the age of 47 years old.

Jose Jimenez’s discography (may be impartial)