Robots are fascinating characters in many popular movies and TV shows. We might like to dress up as these robots for Halloween and costume parties. There are also action figures and dolls based on such characters. It could be difficult to say which robot is the best, but here are some of our top picks: Among the best of sci-fi in the 80s was Robocop, both the movie and the character. Kids today are still amazed by this character if their parents choose to show them this movie. Admittedly, Alex Murphy, who embodies Robocop, is more of a human, but the robot part is what makes him unforgettable.

The unique design, that iconic gun, and awesome fighting skills are just a few reasons why Robocop was so popular. The fascination doesn’t seem to have faded to this day. This Terminator was one of the classic roles for Arnold Schwarzenegger, and we know that the hype still hasn’t died down. With a new Terminator movie coming out, many fans are revisiting this franchise and finding it just as gripping.

The unstoppable robot here presents a gray character, both good and bad. While keeping up with the many twists and turns of this franchise might be a challenge, there’s no denying that it’s this robot that makes it all work. If you grew up in the 80s or just love that particular decade’s entertainment offerings, you must have come across Johnny-5 at some point. This was one of the most memorable robots from that era and a pop culture staple of sorts.

Johnny-5 was funny, crazy, and unabashedly robotic in his actions. While he certainly had a soft heart, he was nothing like a human being. This made him a character that one simply enjoyed. We’re sure that both kids and teens would love this character even today. However, perhaps the older ones would enjoy these top 20 teen movies from the 1980s more. The Iron Giant was Brad Bird’s creation, and an amalgamation of several things at once. This character was recently given a nod in the movie ‘Ready Player One”, though it wasn’t included in the original book. However, the inclusion was a good move, as this character is full of nuances.

We’ll find both good and bad in the Iron Giant. He’s a weapon as well as a protector, and his shape is decidedly retro. Still, his technology is quite advanced, and he certainly presents a beautiful appearance. No list about movie robots will be complete without the adorable and memorable R2-D2. This is a resourceful character that’s brave, funny, and adaptable all at once. The design is one of the most memorable even for those who aren’t fans of Star Wars. The high-tech design of this movie robot has made it one of the most influential of its kind. The function is also iconic, while the sheer presence of the character is hard to beat even with the technology we have today. Wall-E was probably one of the most humble, loveable, and determined of robots. He’s heroic yet vulnerable and is resourceful enough to survive on earth even when everything else is long gone. Add in his romantic streak, and we have an amazing robot character that’s etched into our memories forever. Daryl was the cool robot we could all relate to while growing up. While he was essentially ageless, Daryl was designed to be a kid at heart. While this heart contained a lot of secrets, there was definitely kindness in his character as well.

Growing up, robots were rarely as relatable and cool as Daryl. He was a kid, like me, so you wanted to be him. There was kindness there and, eventually, some secrets that cemented my love of the character. This is possibly another robot that had a huge impact on many childhoods. With his unique looks and passion for breaking rules, Jinx is a personality that was sure to entertain everyone. Bishop is a genius robot with a knife for a weapon. He’s also pretty loyal and brave, with a nice personality. However, his most memorable trait remains that of self-sacrifice, without which the survival of the main character might have been impossible. Since there were so many different Terminators in this franchise, it’s not cheating to talk about at least a couple of them. This particular model had a baby-like face but was all the more frightening for it. Plus, his appearance was different from any other robot that had previously graced the screens. 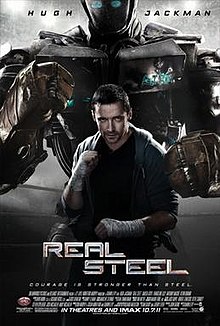 This is a sparring robot that eventually became champion in his own right. While the movie itself is underrated, there’s no doubt that this robot is a great favorite with anyone who’s seen him. His back story is interesting, while his personality makes up the heart of the whole film. The live-action version of Optimus Prime might not have appealed to everyone, but the robot design of this character was undeniably genius. It was gorgeous in appearance and quite realistic as well. The character is also a memorable leader, so it probably saved the whole work. This movie was a mysterious one, but the female robot here was definitely not one to forget too easily. AVA gives us a painful illustration that humanizes robots to an unprecedented level. An added bonus here is that she’s decidedly a feminist character as well. This Steven Spielberg movie is one of his more underrated works, but it’s an edgy work that we can’t miss out on. The plot lies about a century in the future, when robots are designed to have emotions like humans do. The only issue is that David is forced to have these emotions and is then thrown out the brave the world on his own. The result is a heartbreaking performance that should have us thinking twice about messing with technology too much. This David is a fascinating character that originally appeared in ‘Prometheus’. We now have the story of this android, who was both an artist and a rebel. This is a poetic character, which portrays beauty, suffering, and deals with the concept of giving life to a monster.

This is a whole gang of robots who are working on a very human goal; to live as long as possible. They’re not made to destroy or to seek freedom, but rather win our hearts through their empathy and search for meaning. This robot has a reflective exterior and essentially reflects our inner reality. Truth be told, many of us would probably be like this robot—confused, frightened, and bumbling—if we were thrown into space adventures. Continuing the trend of adorable robots, this is a fairly recent offering from Disney that has won many hearts in a few years. Baymax is an amazing friend to have, whether you’re a child, teen, or adult. His expressions and sacrifice only endear him to us all the more. This epic movie might have its flaws, but the antagonist is definitely one to remember. Hal 900 was nothing more than a metal box with a brain, but it controlled a whole spaceship. The personality of this machine has made a huge impact on film, especially within the sci-fi genre.

If we love science fiction, chances are that some of the robots on this list are already among our favorites. For more vintage viewing, we can check out the top science fiction movies from the 50s. These will give us a different experience of our favorite genre.