Roller Coaster is an intense ride that can give a thrilling experience to those who are thrill-seekers. Almost every Amusement Parks never failed to satiate the daring side of people by providing rides such as Roller Coasters that could give your stomach a hard tug, especially when the ride’s going to be too high and fast for a daring heart.

In our modern time, we could see those high rails with the chain of coasters attached to it. But in the earlier era, those rails where hills of snow and those coasters were wooden sleds or wheeled carts.

In the 18th Century, the first type of Roller Coaster had started in the Katalnaya Gorka (Sliding Mountain), in Saint Petersburg in Russia. It was an attraction that became popular because of its version of Roller Coaster-like rides with its seventy to eighty meters height drop in a mountain of snow through a wooden-wheeled cart. Ironically, though its origin was in Russia, Russians still refer to it as ‘American Mountains.’

In July 1817, Nicholas Beaujon, a French banker, built an Amusement Park on Champ Elysees. Its main attraction featured the “Aerial Strolls’’ (Promenades Aériennes) –A wheeled car attached on a guided trail that goes above the top of a tower and down to either of the two way curved track below.

In the year 1846, The first Roller Coaster with a loop track, based on the English design, was released. It has a wheeled sled that can accommodate a single passenger and a vertical-single loop track –also called Centrifugal Railways, of about thirteen feet. As the years go by, Roller Coasters leveled up. From mountain sliding to a singular vertical looped track, it evolved to 200 meters, double eight rail track in 1887.

Even after many years, thrill-seekers were still up for a looping adventure. With a stable demand from people to experience this soul-splitting ride, Roller Coasters up its game to a taller, loopier, and faster ride. The lists below will show you the famous Roller Coasters that will wrench your heart out on its cage: This Roller Coaster attraction, Formula Rossa, located at the Ferrari World, Abu Dhabi, will give you the fastest 240 m/h Ferrari ride. It’s like riding a Ferrari Racing car that would take away your breath for a minute and a half ride. If you want an enormous soul-splitting ride, Kingda Ka, that opened to the public in May 2005, would surely satiate your boldness.

Guinness World Record Holder as the tallest Roller Coaster in the world, Kingda Ka is located at Jackson, New Jersey. It has the highest track of 456 ft., which would drop you down on a 418 ft at a 128 mph. 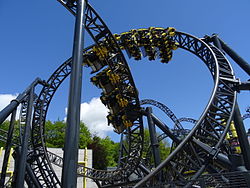 The Smiler –A Roller Coaster with the most number of inversions opened in public in 2013. Located at Alton Towers Resort in Staffordshire, UK, this Coaster ride will leave your head spinning on a 3,838.6 ft long rail adventure with fourteen upside-down loop tracks.

Although it was reported for a collision incident that seriously injured five persons in 2015, it reopened with a new safety measure, the next season.

In 1949, after some part of the ride was burned in a fire, it was reconstructed and underwent a major repair only to be burned once more in 1957. After successfully having the permission to continue operating in 2002, the Scenic Railway is still operating and kicking up to now. With its wooden-track at the height of forty feet and speed of thirty-five mph, this surely is some oldies but still goodies Roller Coaster ride. If you’re up to getting all the perks for the USD 52,000,000 joy ride, Steel Dragon 2000 will make sure you’ll have the longest coaster ride in your whole life.

Located in Nagashima Spa Land, Japan, this rail track is the world’s longest rail track among the roller coaster rides, with 2,479 meters or 8,133 feet long track. In a speed, 152.9 km/h, this Roller Coaster ride will surely dry your mouth from screaming.