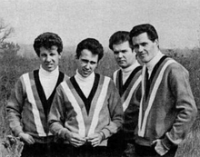 The Hondells were a 60s music-era American surf rock/pop group known for their 1964 Top 10 hit “Little Honda.” The Hondells weren’t a true “band” per se, but rather a manufactured group which was a brainchild of producer Gary Usher. Usher himself had worked with the Beach Boys, who originally recorded “Little Honda.” Brian Wilson and Mike Love composed “Little Honda” as a paean to the Honda motorbikes which spread in popularity in Southern California during the early sixties. The Beach Boys’ original version was included in their album All Summer Long, which Usher gave to Chuck Girard, former vocalist of another band called The Castells. Usher told Girard to study the album and learn “Little Honda.” Usher then assembled a group of studio musicians to record an album dedicated to anything Honda, which what could be well referred to as “hot rod” music. Usher and lyricist Roger Christian wrote all the other songs for the yet-to-be recorded album which would be Go Little Honda. When “Little Honda” was released, it peaked at #9 on the Hot 100 in 1964. Their next two singles “My Buddy Seat” and “Younger Girl” didn’t perform well as “Little Honda” did, and they disbanded in 1970. But for such a fictional, manufactured band, the Hondells did surprisingly well in terms of chart performance, as well as the quality of their output.

The surf rock band The Hondells were a Los Angeles, California band formed in 1964. Producer Gary Usher gathered several studio musicians to form a manufactured music group. Among the  members were Glen Campbell, Hal Blaine, Richard A. Podolor, Joe Kelly, Chuck Girard and Curt Boettcher. Campbell went on to become a famous singer while Blaine became one of the respected drummers who famously worked with the legendary group of studio musicians the Wrecking Crew.

During the popularity of Honda motor bikes in Southern California in the early 1960’s, the Beach Boys members Mike Love & Brian Wilson came up with the song “Little Honda” and later gave it to The Hondells. In 1964, the song was later recorded on Mercury Records and released it as a carrier single for their album All Summer Long.

The ex-Castells vocalist Chuck Girard was given a copy of All Summer Long by producer Usher. After that, Girard was asked by Usher to learn “Little Honda.” To enhance the recording of the song, Usher recruited studio musicians Campbell and Blaine to record it for a Honda-related compilation album that would be released by Mercury Records.

Usher promptly formed a group just for promotional purposes. Backing vocalist Ritchie Burns quickly got the lead singer slot. Unfortunately, he wasn’t available for the band’s photo shoot for the album (for Burns was also working in a bank that time); instead he had his friends to pose for the pictorial. After giving a lot of thought and discussion on the group’s name (they even considered “The Rising Sons”), they finally settled on the The Hondells. Then they went on to release “Little Honda” as a single under the group’s new name, in 1964.

Around that time, their single “Little Honda’ was climbing the pop charts and ended up at #9. The Beach Boys also released a version of their song which was a minor hit for the band.

The Hondells’ other releases and later years