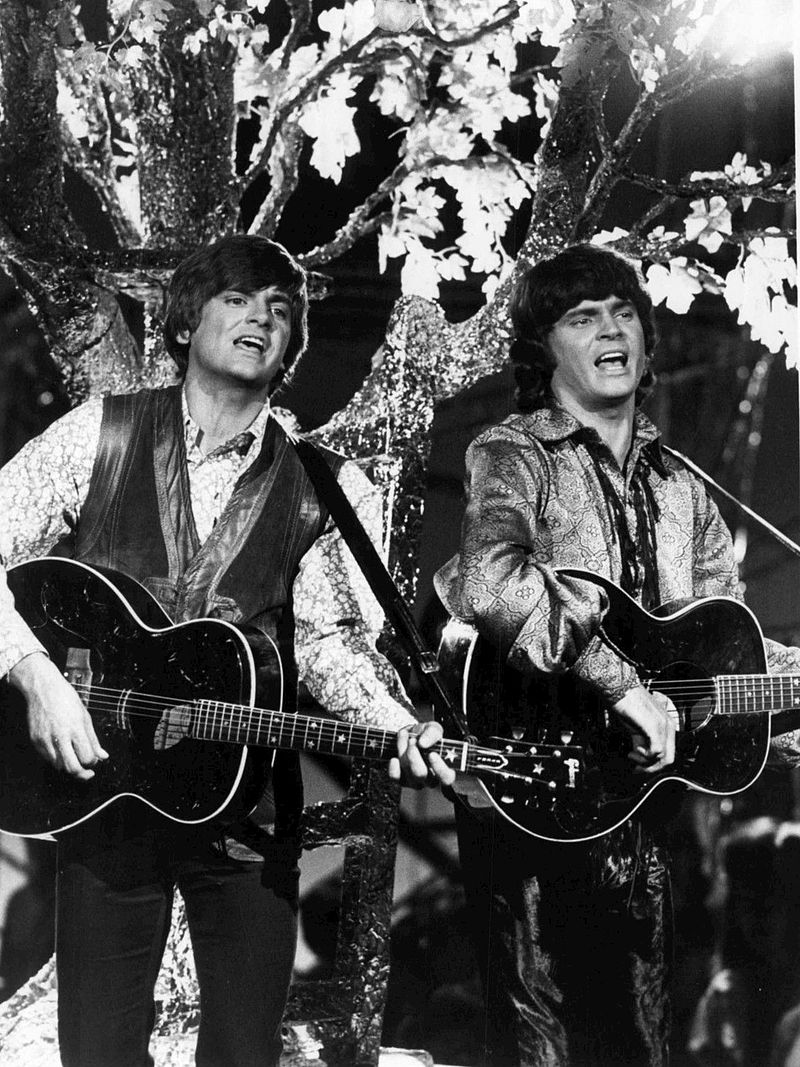 The Everly Brothers were a musical force in the 50s and 60s. They influenced many of the most popular bands we know of today.

The Everly Brothers were a pop and country duo comprised of brothers Phil and Don Everly who reached the pinnacle of fame and success during the 1950s. Their first professional foray was marked by joining Columbia Records in 1956, but their singles saw no chart action. When they moved to Cadence, this is where the career of the brothers took off. Their first single “Bye Bye Love” was shy of topping the Hot 100 in 1957.

The Everly Brothers’ distinctively tight vocal harmonies, snappy country-and-rock ‘n roll-infused tunes as well as their squeaky-clean image helped them to become one of the most influential and significant artists in the 1950s. From very much of the decade well until the 1960s The Everly Brothers amassed a great number of Top 10 hits: “Wake Up Little Susie” (at #1 on Hot 100), “All I Have To Do Is Dream” (#1 hit), “Bird Dog” (#1), “Devoted To You”, “Problems”, “(‘Til) I Kissed You”, “Let It Be Me”, “Cathy’s Clown” (#1), “When Will I Be Loved?”, “So Sad (ToWatch Good Love Go Bad)”, “Ebony Eyes”, “Walk Right Back”, “Crying In The Rain” and “That’s Old Fashioned”.

Until they were surpassed by Hall and Oates in 1980s, the Everly Brothers were the most successful duo of all time in terms of sales and chart performance. They were also highly influential, inspiring future acts such as the Beatles, the Hollies, Simon and Garfunkel and the Beach Boys.

Their professional partnership ended when Phil Everly passed away in early 2014, aged 74.

The tremendous influence of the Everly Brothers

The Everly Brothers are one of the most important figures of rock n’ roll history, especially during the 50s and the early 60s. Throughout their checkered career, they demonstrated their flair for beautiful vocal harmonies that had become their trademark.

The Beatles (particularly in the early days), Simon and Garfunkel, and The Beach Boys, among others, were influenced by The Everly Brothers especially in regards to following their unique vocal style.

It is no doubt to say that the Brothers’ talent for making tunes is inborn, coming from a very musical family. Originating from Muhlenberg County, Kentucky, the Everlys were traveling musicians, and thus the brothers were exposed to music starting at an early age.

The Everly Brothers’ own music career

In 1956 the Brothers were signed to Columbia Records, but when their first single “Keep A Lovin’ Me” did not chart, the label dropped them. Subsequently they were signed to Cadence records where the Everly Brothers yielded their first hit single, “Bye Bye Love” (which was once rejected by 30 artists, including Elvis Presley. The Everly Brothers saw its potential. It is worth noting that the song also made it to the R&B charts at #5.

While their other smash singles — “Wake Up, Little Susie”, “All I Have To Do Is Dream”, “Bird Dog” and “Problems” — were written by the husband-and-wife songwriters Felice and Boudleaux Bryant, the Brothers also became successful composers in their own right. They penned songs such as “Cathy’s Clown” and “(Till) I Kissed You” that also hit the pop charts.

The Everly Brothers’ country-infused rock n roll appealed them to a broader audience. Their songs — expressing romance and heartbreak as well as depicting ordinary situations — were sung in an earnest and melodic manner. They had a clean-cut and straight-arrow appearance. Overall, the Brothers somewhat represented a squeaky-clean, innocent image during that era.

In the early 1960s the brothers secured a multi-million, 10-year contract with Warner Bros. But their success with the label did not last long. Even before the British Invasion engulfed America, the duo’s chart-making power already began to lose steam. Although the Everly Brothers lost favor in the US music scene, they remained popular in countries such as the UK, Canada, and Australia.

The brothers’ breakup and reunion

During the 70s Brothers bitterly ended their partnership. They were not on speaking terms for many years until in the 80s when they staged a triumphant reunion concert at London’s Royal Albert Hall. They collaborated with other artists, including Paul Simon, country star Vince Gill, and Paul McCartney, who wrote the subsequent single “On The Wings of a Nightingale” for his boyhood heroes to perform. The song was a minor success on the charts.

Because of their invaluable contribution to 20th-century music, the siblings were inducted to the Rock And Roll Hall Of Fame in 1986. Up to this day, no other musical duo can surpass the Brothers’ record for the most Top 100 singles, before or since.

Even well into their senior years, Phil and Don continued to perform and remain active in the music scene. Many of their living peers might have long retreated, but for the legendary Everly Brothers, retirement was still far from their plans for the time being

But sadly, Phil Everly passed away on January 3, 2014 of a pulmonary disease brought about by years of smoking. He died just about two weeks before his 75th birthday.