America is the birthplace of the modern hamburger, so it’s not at all surprising that hamburger chains dot in every state. Here are the best-known US burger chains that are either operating regionally or globally. This family-style burger restaurant was first established in Baldwin Park, California in 1948. It holds credit as the first hamburger stand with the drive-thru system. It’s also renowned for its fresh ingredients. Their beef patties come right off the grinder, never frozen, pre-molded and pre-seasoned unlike in many other burger chains. Customers may witness potatoes being sliced right before their very eyes before these spuds get submerged into the deep fryer; the french fries are then served unsalted.

The buns are freshly baked, too. In-N-Out branches used to be concentrated heavily on the West Coast; now it has opened its doors to expansion outside the area and into a few states such as Texas, Arizona, Utah and Nevada. It’s also a favorite of world-class chefs like Gordon Ramsey, Anthony Bourdain, Thomas Keller, Mario Batali and Julia Child. Despite its gradual expansion, In-N-Out still retains its family style goodness in its menu. The Double Double cheeseburger is a must-try for those who want to experience dining at In-N-Out. Owned by Five Guys Enterprices LLC in Lorton, Virginia, Five Guys Burgers and Fries was founded in 1986. Raves for this restaurant rest chiefly on its very good and juicy beef patties, prompt quality customer service, freedom for customers to choose their own toppings and condiments, and the relatively affordable price. Customers can see sacks of potatoes, stacking on top of each other at the dining area — an interesting feature.

While waiting for their order, the customers will still never go hungry as free peanuts are are available for munching. In 2003 Five Guys started franchising, and now it has over a thousand restaurants throughout the US and Canada – more stores are coming every day, so expect to see more of those red-and-white checkered joints popping up everywhere. Another fast food burger chain of note is Burgerville whose branches are scattered througout Washington and Oregon. It is unique because it serves food made from locally-grown produce as well as some different items not found in other hamburger chains. For instance, Burgerville uses Tilamook Cheese, which is locally made in Oregon, for their burgers. It serves milkshakes and frozen yogurt smoothies (called Yocream) with fresh seasonal berries, pumpkins, and even hazelnuts.

Burgerville’s fresh strawberry shortcakes, sweet potato fries, sweet onion rings (the Walla Walla variety) as well as tempura-style fried asparagus are what makes it not just your usual burger chain. Burgervilles’ unconventional ways of running its restaurants is worth noting too. Aside from supporting the local produce mostly around Oregon, Burgerville does its own business practices that are environmentally sound and good for the health. It uses only trans-fat-free canola oil and free-range organic beef for their menu; it also utilizes renewable energy and does composting of their wastes. Founded in Cleveland, Mississippi in 1987, Back Yard Burgers’ branches concentrate mainly on the Southern and Midwestern States. They offer a variety of burgers, including burgers made witih 100% Black Angus beef; chicken sandwiches such as the spicy Blackened Chicken, as well as turkey burgers like the Turkey Club, Wild Turkey, and Classic Turkey burger. Their frozen desserts are BYB’s hits too, most especially their milkshakes. Another burger joint deserving to be in this list is Culver’s, whose operations concentrate in the Midwest. The Sauk City, Wisconsin-founded chain’s claim to fame rests on two things: butterburgers and frozen custard. “Butterburgers” aren’t really burgers that are fried in melted butter; but the buns are slathered with butter, thus giving Culver’s burgers a distinct flavor. Their frozen custard is like ice cream, except that it has added eggs and very smooth texture – a winner amongst frozen dessert lovers. Its sponsorship to various sports teams such as the Chicago Cubs and Wisconsin Badgers have proven to be a boon for the company as well. Part of the Smashburger’s name and slogan – “smash. sizzle. savor.” – comes from the method it prepares its burgers. Smashburger’s beef patties are made from fresh, pure black Angus beef. A ball of ground beef is put on a hot and buttered griddle, then “smashed” with a two-handed press to flatten it, thus turning it into a patty. Then it is seared and seasoned with the restaurant’s own blend of spices. There are two different burger patty presses in relation to size – one for the 1/3 pound and another for the 1/2 pound. Smashburger also allows for a wide range of topping options. We think almost everyone on the planet has heard of, seen or been to McDonald’s. It is currently the largest burger chain not only here at home but worldwide, serving in 119 countries. Richard and Maurice McDonald began their food business in the late 1940s, and eventually they reorganized their establishment as a burger fast food restaurant.

Businessman Ray Kroc is credited with the founding of McDonald’s Corporation in 1955; he eventually bought the company from the brothers and, together with setting new standards in food preparations and customer service, turned it into a multimillion global powerhouse. It predominantly sells burgers, the best known being the Big Mac and the Quarter Pounder with cheese, as well as fries, salads, wraps and frozen delights. In their international outlets though, menu slightly differs depending on the franchising country. Jack In The Box

One of the longest-running American fast food chains first established in San Diego, CA., Jack In The Box was the first food establishment to implement the two-way intercom system in its drive-thru services. Its menu is slightly different from other fast casual dining chains as it offers Americanized versions of international cuisine like tacos, egg rolls, and cheese-stuffed jalapeno poppers. Its line of burgers include the Jumbo Jack, Sourdough Jack, bacon cheeseburger, BLT (bacon, lettuce, tomatoes) cheeseburger, and All-American Jack. Wendy’s was founded in 1969 in Columbus, Ohio, and is now operating and serving worldwide. Its current flagship burgers consist of “Junior” burgers (2.25 ounces and are either served in single or double patties depending on the customer’s orders) and “Single” 4 ounce burgers (served in single, double and triple sizes). Its recent addition is their Hot and Juicy cheeseburgers. Wendy’s is the first fast food chain to introduce a salad bar. It also has offerings of breakfast sandwiches and the signature frozen dessert, called Frosty, which has many variants and toppings such as M&Ms and Oreo cookie crumbles. 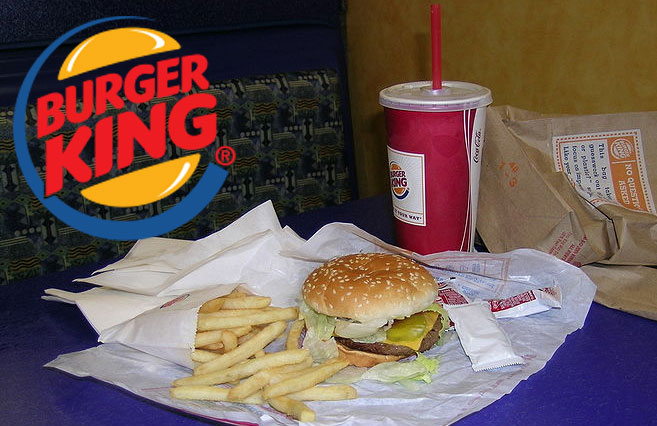 Serving 73 countries through its 12,700 outlets, Burger King is also one big global player in the burger business. Its flagship food item is the Whopper, whose fresh beef patty is cooked on an open-fire grill. Aside from the usual burger trimmings, more ingredients such as cheese, bacon, mustard, are added depending on the customer’s request. In their regional and international outlets, adaptations to local flavors are incorporated into the Whopper. Aside from their beef-based burgers, Burger King also serves chicken and fish sandwiches, veggie burgers and (in some of their international branches) spicy bean burger.

There are many other chains scattered through out the United States. Suffice it say if you hunger for a burger, there should be no problem finding one to meet your palette’s desires.