Many people are into mainstream sports such as basketball, football, tennis, baseball, and rugby. But did you know that aside from these popular sports, there are many unusual sports being played all over the world that you might not have heard about or discovered yet?

Here are some of the unusual sports from different places around the world. Some of them may be hard to believe but they are certainly being played by real people. At Cooper’s Hill in Gloucestershire, United Kingdom, people take part in the annual Cheese-Rolling event. In this sport, a large cheese wheel is rolled down a steep hill. The competitors will then race after it. The first person who will be able to reach the bottom of the hill wins the cheese. It may sound like a really fun game, however, it has resulted in several injuries because of the steepness of the hill. Learn more about this unusual sport on our article, What is Cheese Rolling? Hockey is a very popular sport and it has varieties such as field hockey and ice hockey. But did you know that there’s also underwater hockey? Yes, and it is also known as Octopush.

This sport is being played worldwide. It involves two teams with an objective of pushing a puck with a stick across the floor of a swimming pool going to the opposing team’s goalmouth. Octopush has its own World Championship which was first held in 1980. For more information about this sport, you can read our post, What is Underwater Hockey?

The unusual sport of toe wrestling dates back to 1976 when the Brits were looking to gain a world sports title. The sport involves two competitors who would be going toe-to-toe. They will interlock their toes and try to pin down their opponent’s foot. Read our article, What is Toe Wrestling, for more information about this unusual sport.

Sepak Takraw is popular in Asia and it even started to make inroads in North America in the late 1980’s. Just like a game of soccer, players pass around a ball using anything but their arms. It is played in a court that has the same size as a badminton court. It involves two teams with three players each. The goal is to keep the ball in play and it is scored similar to volleyball. This sport originated in Swaton, England. It has an organization named World Egg Throwing Federation who says that egg throwing is a sport enjoyed by a lot of people. There’s also an annual World Egg Throwing Championship being held in Swaton. It involves a variation of games. For the complete information about this sport, you can check out our post, What is Egg Throwing? This is an extreme and dangerous sport, and a performance art as well. People who join this sport are called ironists. They go to a remote location and iron clothes. They take their ironing boards and unplugged irons to extreme places such as on cliffs, on top of vehicles, and even underwater, then they photograph themselves while ironing clothes.

It is the newest danger sport that combines the excitements of an extreme outdoor activity with the achievement of a well-pressed shirt, based on the sport’s website. If you are interested to learn more about it, you can read our post, What is Extreme Ironing? This is a hybrid sport that combines chess and boxing in alternating rounds. It was invented in 1992 by a French artist and filmmaker named Enki Bilal in his comic book Froid Equateur. The first real event of chess-boxing was held in 2003 and was organized by Dutch artist Lepe Rubingh.

It alternates between games of boxing and chess after each round, waiting for either a checkmate or knockout to decide who will win. It has eleven rounds which starts with a four-minute chess round followed by two minutes of boxing. Read our article on What is Chess Boxing for more information The wife carrying competition is held annually in Finland in early July. It is a sport where male players race in a 253.5 meters course while carrying a female teammate. The course has different surfaces such as dry land and water obstacles. The winner gets a mobile phone and their wife’s weight in beer. For more information about this unusual sport, check out our article about What is Wife-Carrying. This is a Turkish national sport and it is held around the world in June every year. The oldest oil wrestling competition was held in Kirkpinar, Edirne Turkey. It used to be a part of a festival in 1357 celebrating an Ottoman victory. It involves men covered in oil to wrestle with other men to the ground. It also takes place in northern Greece and in the recent years, it also became popular in other countries such as Netherlands and Japan.

This is one of the most unusual sports played in the North Yorkshire Town of Knaresborough.  The first ever bed racing event was in 1965 where Army, Navy, and American Marines were the only ones allowed to join.

They raced in teams of five, plus one on the bed. Each of the teams must have their own bed which is decorated in the theme of the year. It will run on four wheels but must also float on water.

This is a 3km race that ends at Conyngham Hall. In the middle of the run, the teams will face a one-in-five gradient climb to Castle Top. After that, they will go back down the hill and toward the final challenge which is crossing a river. This is a sport of rolling downhill inside an orb. The orb is usually made of transparent plastic. It is performed on a gentle slope but will also work on a level surface for more rider control. For some, this is an extreme sport, but others find it just a fun recreational sport since there is no competition about it. To learn more about this sport, read our post, Zorbing: What Is It and How Is It Played? This unusual sport was invented in 2004 in Spain by Filip Eyckmans. The game is like volleyball but it also includes some elements from gymnastics, football, and capoeira. Bossaball is played on an inflatable court that is specially designed for the sport. It has a circular trampoline on each side of a net. It involves two teams with 3 to 5 players each. For the complete information about this sport, check out our article about Bossaball: A Unique and Exciting Sport.

Outhouse Racing is an entertaining and funny race event that is held in Michigan, USA. It includes teams of four to five members each. The teams will make their own outhouses, which are small, enclosed structures that have one or two holes in a seat built over a pit that serves as an outdoor toilet. They will then race them down Main Street in Coopersville.

One person from the team will ride the outhouse while another member will push, pull, or drag it down the racetrack. This race has been conducted since 1993, and it reaches more than 4,000 spectators each year. Parkour is among the most popular urban sports in the world. It involves balance and power to challenge gravity. Its main goal is to overcome obstacles by moving, running, jumping, and climbing from one point to another in urban places. Unlike other sports, your body is the only tool you need when it comes to practicing parkour. With proper practice and discipline, one will be able to learn parkour effectively. If you’d like to learn more about it, read our article about What is Parkour? Bog snorkeling is a sport where competitors aim to finish two consecutive lengths of 60 yards or 55 meters trench that is filled with water and cut through a peat bog as fast as possible. The participants are required to wear a snorkel, diving mask, and flippers. They need to complete the course without swimming. Meaning they should rely on their flipper power alone. For more information about this unusual sport, check out our article about What is Bog Snorkeling? For many people, pillow fighting is a common game played by children during sleepovers. But did you know that it is also considered a sport? In fact, social media has been used frequently to initiate and advertise public pillow fight events. In Toronto, Canada, there has been a Pillow Fighting League that was operating in bars. March 22, 2008, was the first World Pillow Fight Day, which was organized in the US by two students from the University of Toronto. If you want to know more details about this, read our article about Pillow Fighting is a Sport. Dog surfing is an unusual sport where dogs are trained to surf using surfboards, skimboards, and bodyboards. Though it is not popular, it has been around since the 1920s in places like California and Hawaii in the United States. Just like humans, dogs are also judged on their overall certainty on the board, size of the wave, and how long they are up on their boards. There’s even an annual dog surfing competition called the Surf City Surf Dog Competition, which is held in Huntington Beach in California since 2009. If you are interested to learn more about this sport, read our article, Dog Surfing: An Unusual Sport. Unicycle hockey is similar to the popular hockey sport. The only difference is that it is played by participants while riding a unicycle. It has a governing body called the International Unicycling Federation. It is an interesting and challenging sport. If you’d like to learn about its history, rules, and other facts, you can read our article, What is Unicycle Hockey? 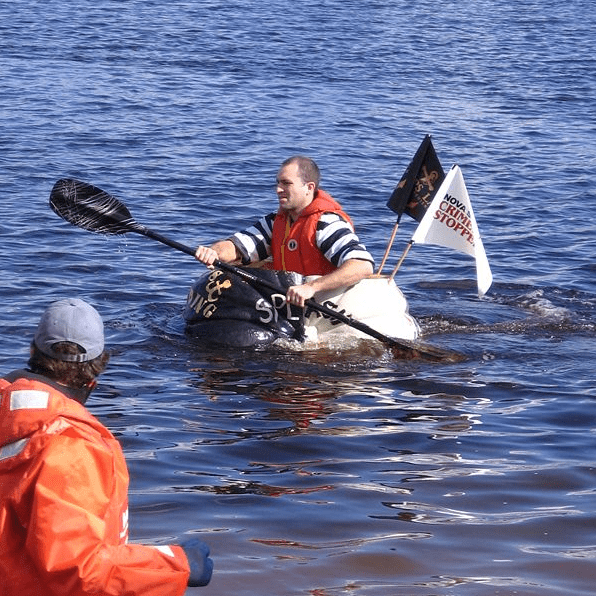 This unusual sport is also known as The Windsor Pumpkin Regatta. It is a yearly water race that is held every October on Lake Pesaquid in Windsor, Nova Scotia. The twist in this sport is that the participants will ride brightly colored giant pumpkins to race across the lake. This race was founded by Danny Dill in 1999, who was the son of the breeder of the Atlantic Giant pumpkin, Howard Dill. If you’d like to know more about this entertaining sport, read our article, Giant Pumpkin Kayaking: A Unique Sport. In India and other countries, there is a popular sport called Kabaddi. It is a game played by two teams on a field or court. The main objective is to score points by attacking and defending. Each team needs to tag out as many members of the other team as possible to earn points. The team with the most points by the end of the game wins. The twist is that a raider from one team will go to the opposite side of the field to tag out as many opponents as possible in a single breath. That raider also needs to go back to their side successfully without being captured by the other team members. For the complete details about this unusual sport, read our article, Kabaddi: A Popular Indian Sport. Soccer is probably the most popular sport in the world. But imagine that you will play it while riding a bicycle. Yes, that is the idea behind the sport called Cycle-Ball. It is very similar to association football, but it is played by players on bicycles. This sport also has a yearly international competition, including an annual world championship. If you want to know about its rules and gameplay, you can read our article, What is Cycle Ball and How Is It Played?

These are some of the unusual sports we’ve discovered. They are indeed strange but they sound entertaining as well. Have you heard or played any of them?