Most commonly, when a rock band member falls out of the group for varied reasons, the immediate remedy is to replace a member and move on making multiple efforts to stay afloat or retain the fame and fortune it has been given. Some typical examples are Journey with Arnel Pineda, Motley Crue with John Corabi, Black Sabbath with Ian Gillan and the list will go on to a never-ending summary. For some, this method becomes successful but for others certainly not. But the legendarily acclaimed band Led Zeppelin chose to leave their fame in the 1980s for one united reason. Read on and discover just why the bank broke up despite its pinnacle of success.

Led Zeppelin was an English rock band that was established in 1968 in London. The band’s members included singer Robert Plant, guitarist Jimmy Page, bassist/keyboardist John Paul Jones, and drummer John Bonham. They are regarded as one of the forefathers of hard rock and heavy metal, with a powerful, guitar-driven sound, despite drawing elements from a wide range of genres, including blues and folk music. Some of their most popular songs are Black Dog, Dazed and Confused, Stairway to Heaven, Whole Lotta Love, and many others. Led Zeppelin is widely regarded as having had a substantial impact on the music industry, particularly in the creation of album-oriented rock (AOR) and stadium rock. Jimmy Page, a session guitarist from London, joined the blues-influenced rock band the Yardbirds in 1966 to replace bassist Paul Samwell-Smith. Page quickly transitioned from bass to lead guitar, forming a dual lead guitar line-up with Jeff Beck. Following Beck’s departure in October 1966, the Yardbirds began to wind down after years of nonstop traveling and recording. Page wished to form a supergroup with Beck on guitar and Keith Moon and John Entwistle of the Who on drums and bass, respectively. Steve Winwood and Steve Marriott, both vocalists, were also considered for the project. Page, Beck, and Moon did record a song together in 1966, “Beck’s Bolero,” in a session that also included bassist-keyboardist John Paul Jones.

The four initially performed together in a space behind a record store on Gerrard Street in London in August 1968. Page recommended they try “Train Kept A-Rollin,” a jump blues tune popularized in a rockabilly version by Johnny Burnette and covered by the Yardbirds. “I knew this was going to be spectacular as soon as I heard John Bonham play,” Jones remembered, “and we locked together as a team immediately.” Before departing for Scandinavia, the ensemble participated in a P. recording session. Three Week Hero by J. Proby. The album’s tune “Jim’s Blues”, featuring Plant on harmonica, was the first studio track to feature all four future members of Led Zeppelin.

On September 7, 1968, when the band completed their Scandinavian tour as the New Yardbirds, performing together for the first time in front of a live crowd at Gladsaxe Teen Clubs in Gladsaxe, Denmark, they began work on their first album, which was based on their live performance. Page funded the costs of recording and mixing the album in nine days. Following the completion of the album, the band was compelled to change their name after Dreja filed a cease-and-desist letter declaring that Page could only use the New Yardbirds alias for the Scandinavian gigs. According to one account of how the new band’s name was formed, Moon and Entwistle remarked that a supergroup with Page and Beck would be a “lead balloon,” an idiom denoting terrible effects. At the recommendation of their manager, Peter Grant, the group deleted the ‘a’ in the lead so that those unfamiliar with the term would not pronounce it “leed.” The term “balloon” was substituted with “zeppelin,” which brought to Page’s thoughts “the right blend of weighty and light, combustibility and grace,” according to music critic Keith Shadwick.

During the 1970s, Led Zeppelin achieved new levels of financial and critical success, elevating them to the ranks of the era’s most influential bands and eclipsing their previous triumphs. The band’s image also evolved as the members began to wear lavish, flashy gear, with Page leading the way with a dazzling moon-and-stars ensemble. Lasers, professional light shows, and mirror balls were used by Led Zeppelin to change their act. They began flying in a private jet airliner called the Starship, hired out large areas of hotels (notably the Continental Hyatt House in Los Angeles, informally known as the “Riot House”), and became the subject of regularly repeated stories of debauchery. One incident had John Bonham riding a motorcycle through a rented floor of the Riot House, while another was the trashing of a room in the Tokyo Hilton, which resulted in the group being barred from the hotel for life. Although Led Zeppelin gained a reputation for trashing hotel suites and throwing television sets out windows, some argue that these stories are overblown. “Led Zeppelin’s trips produced numerous myths,” music journalist Chris Welch writes, “but it was a fallacy that they were continually engaged in acts of wanton destruction and obscene behavior.”

Bonham’s Death and the Band’s Break Up After two warm-up shows in Copenhagen, Led Zeppelin headlined two concerts at the Knebworth Music Festival in August 1979, performing to an estimated 104,000 people on the first night. In June and July 1980, the band embarked on a brief, low-key European tour, performing a stripped-down show devoid of the usual long jams and solos. On June 27, during a concert in Nuremberg, Germany, Bonham fainted onstage and was transported to the hospital in the middle of the third song. The press speculated that his fall was caused by heavy alcohol and drug usage, while the band said that he had merely overeaten.

On October 17, 1980, the band was scheduled to embark on its first North American tour since 1977. Rex King, a member of Led Zeppelin, picked up Bonham on September 24 so that he could join rehearsals at Bray Studios. During the voyage, Bonham requested a breakfast stop, where he drank four quadruple vodkas ranging from 16 to 24 US fl oz 470 to 710 ml with a ham bun. He said to his helper, “breakfast,” after taking a mouthful of the ham bun. After arriving at the studio, he began to drink heavily. Late that evening, rehearsals were called off, and the band retired to Page’s home, the Old Mill House in Clewer, Windsor.

Bonham, who had fallen asleep, was taken to bed and placed on his side just after midnight. The next day, at 1:45 p.m., Benji LeFevre Led Zeppelin’s new tour manager, and John Paul Jones discovered Bonham dead. The cause of death was asphyxiation by vomit, and the reason for death was unintentional. An autopsy revealed that Bonham’s body contained no additional recreational drugs. Although he had recently started taking Motival a combination of the antipsychotic fluphenazine and the tricyclic antidepressant nortriptyline to treat his anxiety, it is unknown whether these medications combined with the alcohol in his blood. On October 12, 1980, Bonham’s ashes were interred in Rushock parish church in Worcestershire. 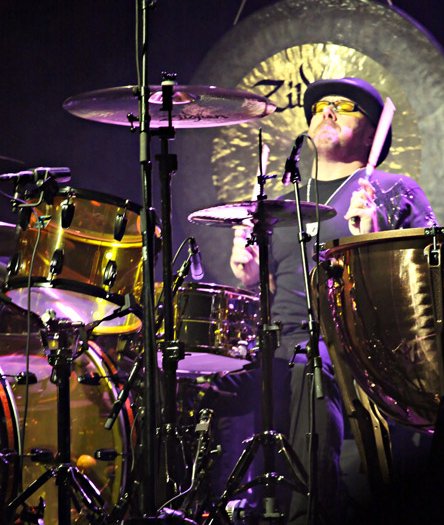 The planned North American tour was canceled, and the surviving members chose to separate despite rumors that Cozy Powell, Carmine Appice, Barriemore Barlow, Simon Kirke, Ric Lee, or Bev Bevan would replace him. “We desire it to be known that the loss of our great friend, and the deep sense of complete harmony felt by ourselves and our management, have caused us to determine that we could not continue as we were,” said a press statement issued on December 4, 1980.

Some efforts to reunite were explored including Jason, John Bonham’s son but the band members’ enduring take was that the group was different without their original drummer. Robert Plant expressed his reasons to Jason on why Led Zeppelin can’t reunite saying, “I loved your dad way too much”. He further expressed that it was not to disrespect Jason and that he recognizes his superb ability on the drums and that no one can play it the way he does. Plant genuinely felt that the band was not the same without John and that he basically cannot go out and perform faking to be the same.  His strong and emotional statements included that when Jason’s father left when he left the world, that was it for Led Zeppelin.

Finally, Led Zeppelin’s break-up was solid and permanent, unlike any other band that experiences setbacks and bounces back after. This is very much common with recent boy bands of the 21st century just like the break-up of the Jonas Brothers who decided to separate in 2013 but after six years they reunited but failed to sell as many records as when they were at the peak of their career.