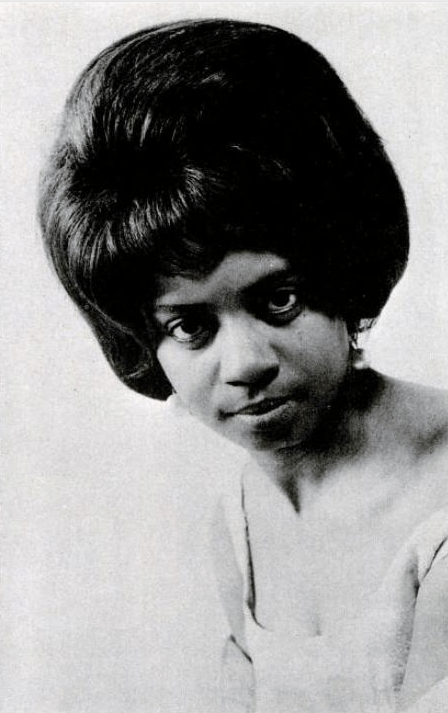 Fontella Bass (born on July 3, 1940 in St. Louis, MO) was an American soul and gospel singer who found her most fame in the mid 1960’s.  Fontella was the daughter of gospel singer Martha Bass who was a member of the Clara Ward Singers.  Before she had reached her teen years Fontella  had joined her mother on tour as a pianist and singer.  As a teen she switched from gospel to secular music and was soon heard by Little Milton’s band leader Oliver Sain as a pianist.  She would eventually start singing and along with male vocalist Bobby McClure became a member of the “The Oliver Sain Soul Revue featuring Fontella and Bobby McClure”.  Soon after she began recording records on the St. Louis based Bobbin Records.  The records were produced by Ike Turner, but had little success outside of St. Louis.  She moved to Chicago where she signed with the Chess Records subsiidiary Checker Records.  It was there that she recorded her biggest hit song “Rescue Me” Which she wrote along with Raynard Milner.  The song peaked at #5 on the Billboard Hot 100 pop chart and #1 on their R&B chart.  Fontella never had another Top 10 hit, but did have four other recordings that charted either in the Hot 10 or the R&B charts:  “Don’t Mess Up a Good Thing” and “You’ll Miss Me (When I’m Gone), with Bobby McClure, “Recovery”, “I Surrender”, “I Can’t Rest”, “Safe and Sound” and “You’ll Never Know”.  In the early 70’s Fontella left show business to raise her four children, but stiill made occasional attempts to revive her career in the late 70’s and 80’s with little success.  In 1990 she recorded a gospel album with her mother Martha Bass and brother David Peaston.  In 1993 “Rescue Me” was used in an American Express commercial which revived Fontella’s career.  Fontella Bass has been inducted into the St. Louis Walk of Fame.  Other Fontella Bass Hit Songs:  “Lucky In Love,” “Sweet Lovin’ Daddy,” “Soul Of the Man,” “I Know,” “Gee Whiz,” “I’m a Woman,” “Our Day Will Come,” “Impossible,” “You’ve Lost That Lovin’ Feelin,” “Oh No, Not My Baby,” “How Glad I Am,” “Since I Fell For You,” “Come and Get These Memories,” “To Be Free,” “Hold On This Time,” “I Want Everyone to Know,” “I Need to Be Loved,” “Talking About Freedom,” “I Need Love,” “Wiping Tears,” “Now That I’ve Found a Good Thing,” “Who You Gonna Blame,” “My God, My Freedom, My Home,” “Soon As I Touched Him,” “You Can Betcha in Love,” “Home Wrecker,” “It Sure Is Good,” “I’m Leaving the Choice To  You,” “Mandela,” “D.B. Blues, ” “Thank You Lord,” “In the Garden,” “Walk With Me,” “Travellin’,” “It’s Alright Now,” “Special Lady,” “Round and Round,” “ All That You Give,” and “The Light of the World,” “No Ways Tired,” “All My Burdens,” “I Surrender All,” “Lean On Me,” and “Walk With Me.”

American R&B and soul singer Fontella Bass was born on July 3, 1940 in St. Louis, Missouri. Music ran in the blood, as Bass’ mother Martha used to be a member of the gospel group, the Clara Ward Singers. At five, Bass used to sing with her grandmother at funeral services and played the piano as well.  She then joined the church’s choir when she was six. By the time she was nine, Bass was already touring with her mother throughout the South and Southwest until she reached 16, probably to finish her high school studies.

Bass started to appreciate secular music which she used to sing at local contests and fairs. In 1961, she worked as a singer at Leon Claxton carnival show where she also played the piano as well. Bass was later hired as a pianist by vocalist Little Milton and bandleader Oliver Sain after  watching Bass’ performance with Claxton. She was soon given a vocal spot in the band when Milton showed up late in one of their shows. Eventually, Milton and Sain’s tandem drifted, and Sain formed a new group with Bass. Along with the new recruit Bob McClure as singer, they were called as “The Oliver Sain Soul Revue featuring Fontella and Bob McClure.”

Bass left the band and relocated to Chicago where she pursued a solo career in 1963. She later became a recording artist for Chess Records and worked with singer McClure, who also happened to be another Chess artist. In 1965, they recorded “Don’t Mess Up a Good Thing” which became an instant hit, peaking at #5 on R&B and #33 on pop. The successful single was later followed by with the lesser hit “You’ll Miss Me (When I’m Gone).”

After finishing tour dates with McClure, Bass recorded the “Rescue Me” in 1965. The self-penned single became Bass’ biggest smash hit. It stayed as a chart-topper for a month on R&B and later peaked at #4 on the US pop and #11 in the UK. The record gained gold disc status after selling over one million copies.

After years of releasing of unsuccessful singles, Bass decided to retire from the music business and focused on being a mother to her four children with husband Lester Bowie. In 1990, she came back and released the gospel album Promises: A Family Portrait of Faith which she recorded with her mother and brother David Peaston. In May 2000, she earned a star on the St. Louis Walk of Fame.

In the 2000’s, Bass was hit with breast cancer which she eventually survived. In 2005, she experienced a series of strokes. After struggling with her deteriorating health, 72- year old Bass died on December 26, 2012. Bass, with all her stellar talent and records, remained very much an obscure in the 60s music scene.