Nicknamed as the Hawkeye State, Iowa is the 29th state of the United States. It is the only state that is bordered by the rivers on both its eastern (Mississippi River) and western (Missouri River and Big Sioux River) sides. Iowa also has a strong French and Spanish colonial past. Despite the image of Iowa being an agricultural state, other industries such as finance and insurance, manufacturing, government services and biotechnology have also formed part of Iowa’s currently diversified economy. Iowa is now one of the safest and most business-friendly states in recent years. Its capital and largest city is Des Moines. The Iowa Old Capitol Building was once the seat of Iowa’s government, and is located in the former state capital Iowa City . Built in 1842 and designed in Greek Revival architectural style, the building is now a historical site.

The old capitol’s dome was struck by fire in 2001. Restoration took place in 2003 with the new replacement dome which was plated with gold leaf. Since it reopened after the reconstruction of the dome, its ground floor has now been functioning as a museum. It still holds university lectures and doctoral defenses as in the past. The Iowa Supreme Court is Iowa’s highest court. Located in the capital Des Moines, it was founded in 1841. A court of appeals (appellate court) and constitutional head of the Iowa Judicial Branch, it consists of of a Chief Justice and six Associate Justices. The St. Ambrose University is a private Catholic liberal arts university located in the residential area of Davenport, Iowa, founded in 1882. Once a seminary for young priests-to-be, it is now a coeducational university which offers a variety of programs that range from business and nursing to engineering and of course social work. The ubiquitous oak, specifically the burr (bur) oak (Quercus macrocarpa), was chosen by Iowa as its official state tree in 1951. The wild prairie rose (Rosa arkansana) was chosen by Iowa as its official state flower in 1897. Like many states, agricultural has been a major contributor to Iowa’s economy for many years. Corn, hogs, soybeans, oats, cattle, eggs and dairy products are among Iowa’s main agricultural products. Iowa is the biggest corn producer in the US and in fact has a corn production which is three times that of entire Mexico. In downtown Davenport, Iowa you will see the a  pedestrian bridge called the Davenport Skybridge. Situated 50 feet above the River Drive (Highway 67), the Davenport Skybridge is a cable-stayed bridge spanning at 575 feet long. There is an observation deck at the south end of the bridge where you can view the Mississippi River. Des Moines (population, 2014: 209,220) has been Iowa’s state capital since 1857; it is also the state’s largest city. Named after the Des Moines River, the city is now and important hub for business, finance and insurance. In fact, it tops the list for the insurance firms across the country. A lot of presidential campaigns have also set up their headquarters in Des Moines. 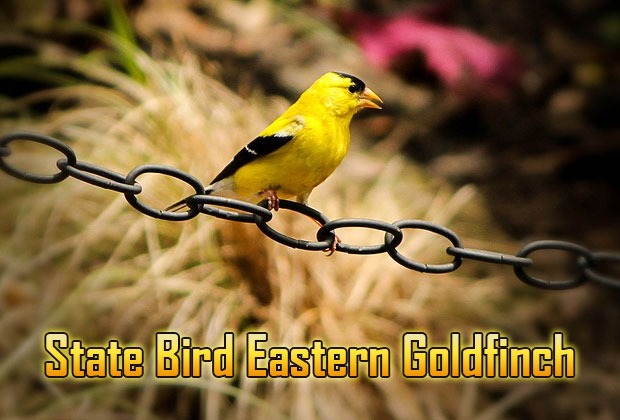 The eastern goldfinch or the American goldfinch (Carduelis tristis) was declared by Iowa as its official state bird in 1933. Iowa has a past as part of the French Louisiana Territory. Its state flag is obvious of the French influence; like the flag of France, the Louisiana flag consists of vertical stripes of blue, white and red (in that order). The white of course is the center where a bald eagle holds a ribbon that reads: “Our liberties we prize and our rights we will maintain.” The flag was adopted in 1921. The Fort Atkinson State Preserve is located in the county of Winneshiek, Iowa. It consists of the remains of the Fort Atkinson frontier post, founded during the 19th century. The frontier post was established in order to protect the Native American tribes as well as to prevent white settlers from intruding on their area. It is now regarded as state park and a historical site. Located near Greeley, Iowa, the Fountain Springs Park is a 240-acre park where nature lovers can enjoy the virtual wilderness. Visitors can hike, do picnics, camp out and do  fishing. The park is also equipped with facilities that include toilets and parking spaces for RV vehicles. The Grotto of the Redemption is located in the city of West Bend, in Kossuth and Palo Alto counties, Iowa. What’s unique about this grotto is that it’s made of minerals and petrified organic materials (like fossils). It started construction in 1912 and continued for more than four decades. It is also believed to be the biggest grotto in the world. Iowa’s nickname is The Hawkeye State. It was named in honor of the Native American (Sauk) chief Black Hawk. It was approved as a nickname when Iowa was still the Territory of Iowa — less than a decade before it became a US state in 1846.