Pop culture in the 90s was defined by several things; catchphrases in movies, brightly-colored clothing, long-running sitcoms, and so much more. People might remember this decade in different ways, but there are still some references that scream 90s for anyone who’s familiar with the era. Let’s have a look at some of the most iconic examples below:

Laugh tracks in sitcoms are still around, but they’re much more muted than the loud, rollicking ones of the 90s. In fact, the top sitcoms of the 2010s would try to rely more on the laughter of live audiences. In the 90s, however, just about every sitcom had a proper, in-your-face laugh track that halted the actors’ performances for at least a few seconds every couple of minutes (just an estimate).

Whether you’re looking at long-running hits like ‘Friends’ or “The Fresh Prince of Bel-Air’ (with a shorter run, but still iconic), the laugh track was part of the experience. Yes, it’s usually condemned as irritating and needless now and wasn’t very welcome back then either. However, studies have shown that laugh tracks do work in improving the ratings and enjoyment of a comedy show.

Kids and teens of the 90s might be young adults glued to their phones now, but they will remember how their initial experience of the Internet wasn’t so smooth and convenient. In order to connect to the World Wide Web (no one probably says that anymore either) back in the 90s decade, you had to sit at a proper computer, connect the phone line, and dial up the internet. This was usually signaled by a series of sounds, which everyone who was around in the 90s can relate to. It took some time for this connection to be established; even if you did manage to connect on the first try, there was always a risk of getting disconnected without warning at any time.

Plus, dial-up internet would also usually tie up the phone line. You had a choice; leave the landline open for outgoing and incoming calls, or browse the internet. This naturally led to a series of arguments and even fights between family members, so it’s just as well that we all have our mostly trusty Wi-Fi these days. There’s no doubt that ‘Friends’ is one of the most popular shows to come out of the 90s, but ‘The Rachel’ is just one example of how influential it really was back then. This was a bouncy, layered look that the character ‘Rachel’ (portrayed by Jennifer Aniston) wore in the first two seasons of the hit show ‘Friends’. While Aniston herself wasn’t too fond of the cut and likened its maintenance to surgery, that style had a huge following in the 90s.

In fact, the hair trend around Rachel’s style became a kind of international phenomenon in that decade. Women would enter salons clutching magazine pages or any other picture of Aniston with the Rachel hair and ask for an exact replica. According to the Daily Express, this hairstyle was also highly popular with British women as well as Americans. Marie Clair also estimated that around 11 million women must have opted for this style at some point during the 90s.

Given that the show had only just begun, this goes a long way in showing just how much people loved it. You can read up on just what made the show so very popular. It’s also speculated that the haircut was at least partially responsible for Aniston’s success, even making her more popular than Courtney Cox. 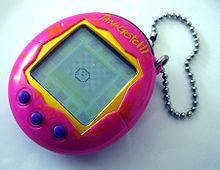 A little beeping device could transport you back to the 90s if you saw it today. Tamagotchis are still available, but they really took over the toy market back then. These were basically digital pets that you could tote around like key chains. Before we had virtual pets and games like “Pet Rescue”, these were the next best thing to having a real animal of your own.

The Tamagotchi required regular feeding, medication, and sleep in order to grow into an adult form. We also had to clean up its waste and make sure it was eating a balanced diet. However, the amount of work it took to keep that ‘pet’ alive was probably more than a kid could accomplish. As a result, it wasn’t unusual for a Tamagotchi to get sick or malnourished and ‘die’ before its time. Luckily, all it took was the press of a button to reset the whole thing and get you a new baby pet.

We’ve seen a lot of 80s and 90s shows being revived o television these days. The names would have us waxing nostalgic, especially when the good old Nickelodeon shows visit our screen again. The classic cartoons include Rugrats, Hey Arnold!, and Rocko’s Modern life among many others. Even if one of our favorite Nickelodeon shows isn’t coming back to TV or the streaming service Nickspalt, we can always revisit the old episodes online.

Nickelodeon was the highlight of the 90s for many kids and some teens as well. This was the channel that you could tune in to for bright, loud, and kid-friendly entertainment all week long. The storylines of the cartoons were also much more solid than the usual fare on other channels, while the game shows gave you a thrill every time. Add in shows like Drake and Josh or Kenan and Kel, and you have a treasure trove of 90s memories to visit.

Many of us are still enjoying the pastel rainbow unicorn trends these days. If that’s the case, we probably enjoyed Lisa Frank’s offerings during the 90s. This lady gave us colorful, psychedelic designs and brilliantly-colored animals that included tigers, dolphins, unicorns, and monkeys.

Going to school with Lisa Frank school supplies made our day back in the 90s. It probably still would for many kids today, so you might want to include her stickers in your list of the essential items your preschooler needs. Before shows like The Big Bang Theory came along and made nerds cool, Family Matters gave us a loveable, geeky character that quickly took over the whole show. Steve Urkel was meant to be an annoying one-time appearance on the show, but the charter turned out to be highly popular with the audiences. Eventually, Urkel managed to become one of the main stars of the show, if not the leading character himself.

The antics and earnestness of this character, along with his catchphrase ‘Did I do that?’ quickly turned him into a household name during the 90s. This was quite fortunate for the actor behind the Urkel name, as he was almost in the cast of The Cosby Show before this.

While the 90s might be in the past, its pop culture references help to keep it alive for those who loved this decade. With so much available at our fingertips, we can easily buy the toys or watch our favorite content from the 90s. It might seem better or worse than the first time around, but the experience will probably be fun.