The United States may be famous for its world-class tourist destinations such as the Statue of Liberty, the Golden Gate Bridge, Mount Rushmore, Hollywood, and the Grand Canyon. Though they’re no less breathtaking and enchanting, sometimes you’re looking for some more exciting and fascinating new twists to your trips across the US. Lucky for you, there is plenty of the “weird and wonderful” side of the USA that you can barely wait to discover!

Featured here are some of the oddities and “out-there” sights that you might want to add to your next American holiday, in addition to your conventional “must-see” attractions. 1. The Leaning Tower of Niles (Illinois) Retired plumber-turned-artist and curator Barney Smith has masterfully converted over 1,000 toilet seats into works of art. Every embellished toilet seat is a conversation piece indeed. Visit this one-of-a-kind museum in San Antonio, Texas, if art and toilet (and toilet humor, maybe) are your kind of thing. Located in Independence, Missouri, Leila’s Hair Museum showcases the best and the quirkiest of hair art that dates back from the 1600s. You can find a lot of hair-related curios from brooches to wreaths to even jewelry and decorative pieces made from human hair (and there are lots of them!). You may also spot some other knicknacks containing locks from famous figures like George Washington, Michael Jackson, Queen Victoria, and Marilyn Monroe. Quite hair-rific! Like many other inland “seas,” the Salton Sea is a lake — in fact, it is the biggest lake in California. It lies in the middle of a vast desert, and precariously on the San Andreas fault. It is an endorheic basin, which means that the lake doesn’t flow out to larger bodies of water such as an ocean or a river — it just stays there.

The Salton Sea is a shallow, saline lake. Because it is stationary, oxygen is obviously depleted, and salts have built up in its waters over time. As a result, the Salton Sea is so briny it even beats the Pacific Ocean when it comes to saltiness. Furthermore, its salinity continues to increase that most species that live in it have been endangered. However, there are just a handful of plants and animals that can amazingly survive the salty waters.

The lake is the product of an irrigation accident in 1905 when massive flooding from the Colorado River destroyed the canal’s headworks. In the following 18 months, the river’s waters continued to flow freely into the vast basin until workers finally managed to stop it. And that basin became the present Salton Sea.

The question is, is the Salton Sea safe for swimming? A quick dip maybe. You may even float on the water’s surface. But a full swim there is not usually recommended because of its high salt and sulfur content. In other words, the water is toxic to lots of living things. But if you’ve got spunk to go deeper into the lake, good luck with that! 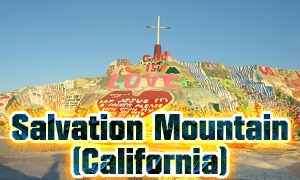 Just a number of miles from the Salton Sea you can spot a hill, but it’s not just another usual hill. It looks curious and colorful, and, wait… it has Bible passages?

Yes, you’re not wrong! The Salvation Mountain is actually a 100-foot-high mound created by the late visionary artist Leonard Knight. Made of concrete, hand-mixed adobe and straw, this hilly artwork was topped off by several gallons of acrylic paint, and a cross at its peak. Knight painted Biblical quotes and Christian sayings, all carrying a catholic (not the religion) theme. Since its creation, the Salvation Mountain has been a revered hub for folk art devotees. While you’re doing a cross-country ride (or planning to), don’t forget to make a roadside stop at the Wall Drug, located in the town of Wall, South Dakota. Starting as a small pharmacy in 1931, it has grown into a large shopping complex full of things that you may need for your additional travel essentials, as well as souvenirs.

Wall Drug still offers free iced water as it did many decades before, as well as 5¢ coffee and bumper stickers. Food sold in this cowboy-themed establishment includes burgers, homemade donuts, and sodas. It also features attractions such as life-sized animatronic dinos and the giant “Jackalope” where you can get on them. Wall Drug makes more than a worthy place to buy stuff and pass the time as you’re cooling your heels. If you’re a science geek, in particular, you cannot afford to miss the Meteor Crater, located about 37 east of Flagstaff, Arizona. This awesome hole was created from an impact by a blazing meteor some 50,000 years ago. It measures 1,200 meters across, and has a depth of 560 feet. Though it is now a popular tourist attraction, going to the bottom of the crater is strictly prohibited. Had fun riding the Jackalope at the Wall Drug? After that, maybe you’re looking for something a bit different. How about the corniest place on earth — literally? No problem, as South Dakota offers another strange tourist attraction that goes by the name of Corn Palace.

Located in the city of Mitchell, the majestic Moorish-style palace is adorned with murals having corn (what else) as a medium. Thousands of corn is installed; they are of many different colors. They are removed and re-designed yearly to carry a specific theme. The corn-based murals are not only seen on the exterior walls, but on the interiors as well. Yes, you’d find the palace really bizarre but you cannot help but gasp at the sheer artistry! If you’re asked with the question “do you live in a rock?”, you might find that insulting. Unless you do live in a rock, just like Albert Christensen did. He carved out a hollow space in this massive rock for 12 years so that he could make it as a home for him, his wife Gladys, and their children. That was during the 1940s.

Now, the former humble abode of the Christensens has been converted into a popular tourist attraction. Located in the canyons in Moab, Utah, this 5,000-square-foot home has 14 rooms, a fireplace and 65-foot chimney. There’s a also a bathtub that’s carved straight from the rock. If there’s the famous Disney World castle, then there’s another castle in Florida that, while off-the-radar to most tourists, will be worth your investigation. That’s the Coral Castle, located in Leisure City. It was the vision of Latvian immigrant Edward Leedskalnin, an amateur artist who built the structure made up of tons of coral rocks.

How Leedskalnin constructed the castle is as strange and mysterious as the structure itself, especially since he worked through the evening so that no one could see what he was up to. The most amazing of all was that how he managed to move all those heavy coral rocks by himself, and how he built them together without using any mortar. The Coral Castle, by the way, was the token of Leedskalnin’s failed engagement to his teenage girlfriend years back, before he immigrated to the US. Yes, he built that out of a broken heart.

The Coral Castle is now listed on the US National Register of Historic Places.