The Northern most state of the union and even though situated next to the original 13 colonies it wasn’t admitted as a state to the Union until 1820 as the 23rd state under the Missouri Compromise. And now you know! As the French were the first white settlers during the 17th century, the name “Maine” is believed to have taken from the French province of Maine (which pretty much sounds like “men”). But there are other theories, such as the coastal English city of the same name, the nautical term “main land” (or “mainland” or “Meyne”), and many others. In other words, the origins of the name “Maine” continue to be contested up to this day. Maine is the only state in the US mainland which shares border with only one state, and that is New Hampshire on the west. In addition, Maine is bordered by the Atlantic Ocean on the southeast, and the Canadian province of Quebec on the north. Bath (population, 2012: 8,408) Maine is nicknamed “The City of Ships”  because it has been renowned for its shipbuliding industry since the 19th century. Much of Maine’s economy, in fact, relies on shipbuilding which has also been a longstanding tradition. Bath is also popular for its well-preseved 19th-century buildings which have helped turn this little city into a popular tourist attraction. The Parrish Shoe Factory in the film Jumanji is actually the Olde Woolen Mill, a former mill at 10 Canal Street, North Berwick, Maine. It was originally built in 1832 but eventually was burned down. The new structure of the mill was built in 1861 (or 1862. It continued to operate for many years until it closed down in 1955. It had remained vacant for four decades until it served as one of the filming locations for Jumanji.

In 2009 the Olde Woolen Mill was restored and converted into a retirement home, which still functions up to the present. It is also officially registered as a historical site. Joshua L. Chamberlain (1828-1914), a college professor, volunteered to become a soldier the US Army (Union Army) during the American Civil War. During his active military career (1826-1866) he rose to the rank of brigadier general and then to brevet major general. He received those ranks only during the height of the war. Chamberlain was also the last Civil War soldier to die from the wounds he had sustained from the combat. As Maine is famous for its lobsters, lobstering or lobster fishing has been a longstanding industry in the state, bringing in millions of revenues annually. As of 2011, the biggest lobster catch that year weighed at around 103.9 million pounds, valued at over $331 million. Maine also produces 25% of all the blueberries in the entire North America with 24,291 hectares of land used for blueberry cultivation. Blueberries are so much important to Maine’s economy that it was made as an official state fruit (specifically wild blueberry). Some festivals are also held in celebration and honor of this fruit. Portland became Maine’s capital as the latter achieved statehood in 1820. Twelve years later, the capital was moved to Augusta. Portland is now Maine’s biggest city and economic hub due to its large population, the state’s largest port, and its proximity to Boston, Massachusetts. Located in the Desert Mountain Island, the Acadia National Park has 47,452 acres of unspoilt mountain-meets-the-sea beauty. The Acadia National Park offers sweeping vistas, trails and spots for the hikers and mountaineers, beaches, varities of flora and fauna, and highest peak (1,528 feet) of the Cadillac Mountain. The West Quoddy Head Light is the easternmost point in the US mainland, located in Lubec, Maine. First constructed in 1808, the lighthouse still operates and is now included in the list of National Register of Historic Places. It looks over the Quoddy Narrows, a strait between the US and Canada. This is the closest point the US can get to Europe. Mount Katahdin is the Maine’s highest point at 5,268 (some souces say 5,270) feet above sea level. Mount Katahdin is part of the Appalachian mountain range and is mostly formed by granite. Katahdin means “Mount Greatest Mountain” in Native American language. Maine is still called the “Toothpick Capital of the World,” although production of toothpicks declined in recent years; the last toothpick plant in Maine closed in 2003. A small town in Maine named Strong (population, 2012: 1,208) used to claim that title as it once produced over 20 million toothpicks per day. 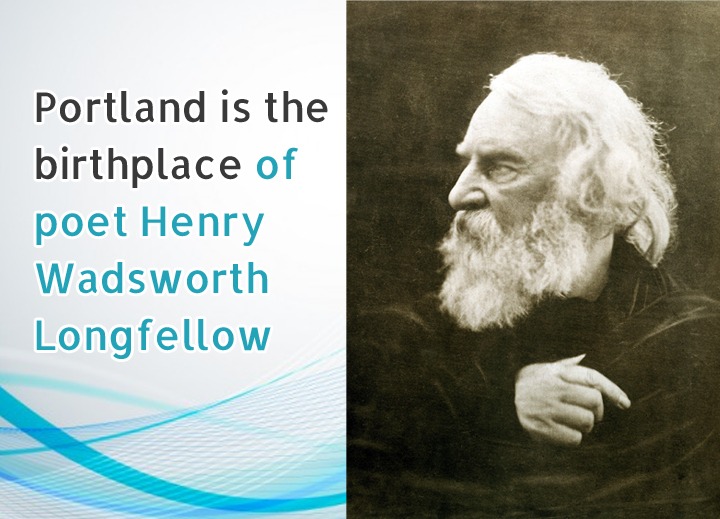 Born in Portland, Maine on February 27, 1807 when Maine was still part of Massachusetts. He died in Cambridge, Massachusetts in 1882. Longfellow is known for his works such as “Paul Revere’s Ride,” The Song of Hiawatha, and Evangeline. He is also known for his translation work of Dante’s epic poem Divine Comedy. The town of Kennebunkport, Maine is the home of the Bush compound, the summer house of the Bush family who includes the former US presidents, George H. W. Bush and his son George W. Bush. It was first built by the senior Bush’s maternal grandfather George Herbert Walker in the late 19th century.

The sprawling, gated compound is heavily guarded by Secret Service officers and considered as a strictly prohibited area. The large house itself has nine bedrooms, four sitting rooms, an office room, kitchen, library, several decks and patios, a vast garage, a swimming pool, tennis court, boathouse and a guest house, among many other features.