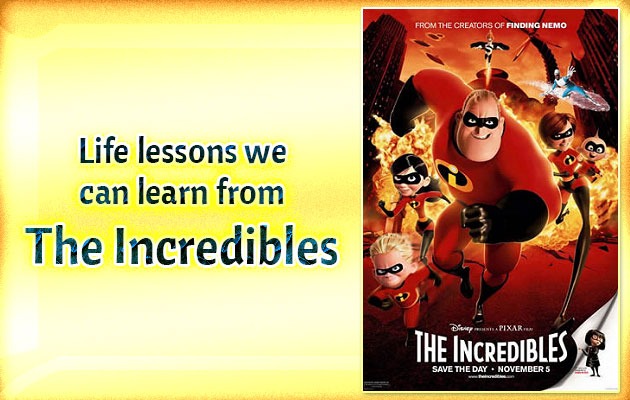 It’s been over a decade since The Incredibles first hit the theaters, and it has become one of the most loved Disney movies ever since. While we are still waiting for its (confirmed) sequel, for now let’s revisit the movie, enjoy watching it, and learn valuable lessons from it along the way over and again.

Edna Mode teaches us of this important lesson.  Although she had made some mistakes in the past when designing previous super hero costumes, which resulted in the death of many of those individuals, Edna did not let these mistakes discourage her and hold her back from what she loved to do.  Rather, she learned from the past and used it to become better at her job. The entire movie was about the Parr family, doing whatever it took to save one another.  They had to make sacrifices, learn to work together, and although they argued at times, they never gave up on each other.

Jack-Jack was a prime example of this lesson.  He was the youngest of the Parr family and didn’t seem to have any powers, so his family underestimated ability to help; however, at the end of the movie, Jack-Jack was the one who saved his family, showing that he actually had more than one super power.  Even though someone may seem insignificant, everyone was put here for a reason and we all have different abilities. 4. The importance of honesty

At the beginning of the movie, Mr. Incredible lied to his family about becoming a superhero again.  Although he had good intentions, he caused a lot of tension and pain within his family.  If we would have told the truth from the beginning, he could have avoided all of this.

It’s easy to do the safe thing, to not take risks, or try something new, but sometimes doing the hard thing, can lead to the greatest reward.  It would have been easy for Mr. Incredible to stay at his boring but safe job, but he chose to challenge himself and take a risk by becoming a super hero again, and in the end, this was the best thing for him and is family. 6. Sometimes your weaknesses can become your greatest strengths

An example of this is Violet.  She always felt invisible and unconfident, but when she began to use her invisibility as an advantage, when she began to embrace her powers, she became a more confident and happier person.  Another example is Mr. Incredible.  He was called weak for not being able to kill, but his compassion, was what made him a true superhero.