Showbiz scandals are not new to Hollywood; in fact they have been here since way back when. Yes, even Tinseltown’s Golden Age era was still teeming with a lot of  gossip and scandals. Some of them may be a bit tamer when compared to today’s scandals, but a lot of them could still shock this generation of fellow stars, fans, and showbiz insiders. Florence Henderson played the mom Carol Brady and Barry Williams played her teen aged step-son Greg Brady on The Brady Bunch. In real life, they hooked up with each other. Henderson wrote in her 1992 autobiography about her off-screen affair with Williams, who was 20 years her junior. Williams has also spoken openly about his crush on his TV mom and their subsequent date, which certainly raised eyebrows. Although the relationship had long ended, they otherwise remained friends until Henderson’s death in 2016. Oscar award-winning actress Ingrid Bergman was still married to dentist Petter Lindstrom (with whom she had a daughter Pia) when she began an affair with Italian director Roberto Rossellini while filming Stromboli. Rossellini was also married at the time of his affair with the beautiful Swedish actress. This sparked a huge scandal in the United States, which only became more intense when Bergman became pregnant. The scandal even led to her to being denounced on the floor of the US Senate. As a result she went through a highly publicized divorce with her first husband and bitter custody battle for their daughter.

It was years before Bergman successfully returned to Hollywood with the 1956 film Anastasia, which led her to win her second Oscar award for Best Actress. When he was 22 years old Jerry Lewis of “Great Balls of Fire” fame married his third wife — a 13-year-old girl named Myra Gale Brown, in 1957. Lewis’ affair with a minor would have raised a lot of eyebrows already, but the more upsetting part of this is that Brown was also his cousin. The scandal broke while Lewis was on his 1958 UK tour that was inevitably cut short (at one point he was booed and called “cradle snatcher” by the audience), and bad press hounded him on his return to the US.

Since the scandal surfaced Lewis was blacklisted from radio stations, and his music career practically went kaput. If this incestuous affair of a rock star and a minor-aged girl happens in the 21st century, it will still result in a sickening scandal that will surely make every newspaper and Internet news headlines. 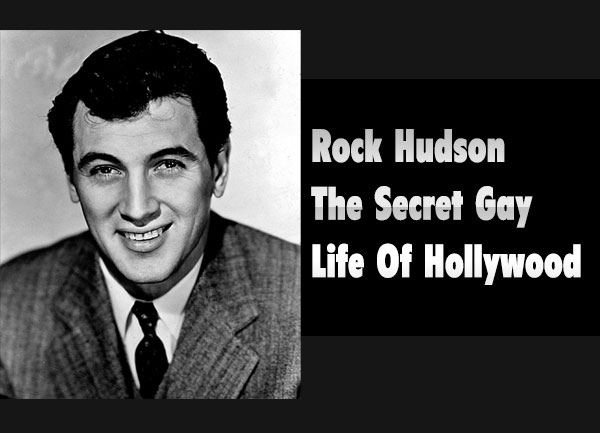 Rock Hudson was the ultimate Hollywood heartthrob — tall, dark, and handsome, plus having a suave appeal. The kind of man that every girl dreams about. What the public didn’t know was that Rock Hudson was a closet gay. Of course, for the sake of maintaining his career as well as his macho image, Hudson never confirmed that he was a homosexual. However, his silence only intensified the rumors. But some of his colleagues, including his Giant co-star Elizabeth Taylor and actress Mamie van Doren, knew about his homosexuality and chose to support him.

Being a gay during Hollywood’s golden age is considered taboo, a flagrant sin. But times have changed. Had Hudson been alive today, he could have been more open about his homosexuality and even married the man he loved. One of the most famous “secret” affairs is the affair between actors Spencer Tracy and Katharine Hepburn. It is because Tracy was married when he began his relationship with the feisty Hepburn. The affair would last for 25 years until Tracy’s death in 1967.

Back in those days, stars having blatant affairs while still married was considered a big, big scandal. Studio executives took great pains to ensure that the affair should be kept under wraps, and Tracy was also careful in concealing this affair from the public and most especially from his wife.

Extramarital affairs in Hollywood today are no longer considered big scandals; instead, they become just mere talks of the town. Contrary to his wholesome, innocent persona in his films, Charlie Chaplin was quite a sexual pervert with a taste for young girls. He married his first wife when she was 16 and he was 29. However, the marriage didn’t last long. Chaplin married another 16-year-old girl, whose surprise pregnancy announcement forced Chaplin to tie the knot. The marriage ended in a messy divorce that almost ruined his career. Despite that, he still went on to marry several more times.

In 1943 Chaplin married his last wife, Oona O’Neill, when she was 18 and he was 54. The marriage became controversial not only because Chaplin married another young girl. Their wedding took place weeks after the paternity suit filed against him by aspiring actress Joan Barry. What’s more, Oona’s father, the playwright Eugene O’Neill, strongly disapproved of their relationship. But it seems that the last marriage worked wonders for Chaplin — he and Oona went on to have eight children of their own and remained married together until his death in 1977. One of the most explosive scandals during the 1950s was the affair between Eddie Fisher and Elizabeth Taylor, as well as his highly-publicized divorce with Debbie Reynolds.

It started when Taylor’s husband, Mike Todd, was killed in a plane crash in 1958. Soon after that, she sought the consolation of Todd’s friend, singer/actor Eddie Fisher. He was married to actress/singer Debbie Reynolds, who also happened to be Taylor’s best friend. When the consolation grew into an affair between Fisher and Taylor, it erupted into a public scandal. Fisher eventually divorced Reynolds to marry Taylor in 1959. But as you may have guessed it, the marriage didn’t last long, as Taylor began an affair with her Cleopatra co-star Richard Burton, whom she would later marry. It’s quite a common knowledge in Hollywood that Elizabeth Taylor married a lot of times — eight times to be exact, twice to the same man. Eddie Fisher, who is mentioned earlier, was her fourth husband. Taylor’s first marriage, when she was 18, was to hotel heir Conrad Hilton in 1950 but it lasted only eight months. She married her second husband, Michael Wilding (1952-1957). Her marriage to third husband Mike Todd (1957-1958) ended when he died in an airplane crash.

After the tumultuous scandal generated from her affair with Fisher and the end of her friendship with his ex-wife Debbie Reynolds, they married in 1959. But the union did not last long, as Taylor began to have an affair with Richard Burton, her co-star in Cleopatra. Burton was also married at the time of the affair. As expected, it sparked another big scandal – so big that even the Vatican condemned it. After divorcing Fisher, Taylor married Burton in 1964.

After ten years of marriage though, Burton and Taylor divorced for the first time in 1974. They remarried in 1976, but less than a year later they divorced again, this time for good. Taylor went on to marry politician John Warner (1976-1982), and construction worker Larry Fortensky (1991-1995).

Taylor was also engaged for a short time to Mexican lawyer Victor Luna in the early 1980s and also dated publisher Malcolm Forbes. Apart from his fame for his “swashbuckling” films, Errol Flynn also earned a reputation for his womanizing, drinking ways. He also became addicted to narcotics for a time. During the peak of his career, he seduced 17-year-old aspiring actress Betty Hansen in 1942, while they were partying at the Bel-Air home of Flynn’s friend. Another under-age girl, Peggy Satterlee, was also seduced by Flynn while they were boarding on his yacht.

Both girls accused him of statutory rape. It sparked a huge scandal during that time. And although Flynn was later cleared of the charges, his screen image as a romantic leading guy was otherwise permanently ruined.