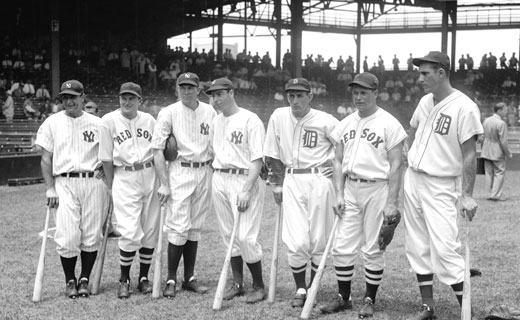 This hub compiles a list of top baseball players who have made the history in this sport with its most eventful moments. This may be based on their overall career stats, special achievements, and their contributions and impact to baseball as a whole. It’s expected that not all baseball fans may agree to this list and we’ll respect their opinions. This is hub is like any other assessment, and compiling these great players is a harder task than we’d ever think. (This list is in no particular order; the years in parentheses indicate their active stint as a baseball player). Barry Bonds is a leftfielder with a mean hitter. He played in the Major League Baseball for over 22 seasons. The son of a major league All-Star outfielder Bobby Bonds, Barry Bonds spent his first seven seasons playing for the Pittsburgh Pirates, and for the San Francisco Giants for the next 15 seasons.

Some of Bond’s crowning achievements are his most career home runs (with 762), and homeruns in a single season (with 73), already surpassing his godfather William Mays on the all-time homerun leaders list. He even reached beyond the number of the total of home runs that both Babe Ruth and Hank Aaron tallied. He hit the home run #71, surpassing Mark McGwire’s record. Bonds also has the most career walks (with 2,558) and most career international walks (with 688). Babe Ruth wouldn’t be called the “Sultan of Swat” for nothing. He was considered as modern baseball’s first great slugger, not to mention he is one of the most celebrated figures of all time not only in the world of baseball but in the whole sports world. While everyone remembers him as a slugger, it is interesting to note that he started his career as a pitcher.

Ruth was part of the famous (or some say infamous) trade between the Chicago Red Sox and the New York Yankees. After he joined the Yankees, Ruth’s career exploded. He spearheaded the Yankees to seven American League pennants and four World Series championships. Ruth was known to “call his shot.” He hit 60 home runs in 1927. He also hit a total of career 714 home runs, that record was only to be broken by Hank Aaron five decades later. A leftfielder, many fans and analysts consider Ted Williams as the finest hitter in the modern era — no wonder he was a six-time batting champion. One of his greatest moments was his historic home run #500 against rivals the Cleveland Indians in 1960. He was also a two-time Triple Crown Winner, and a 17 All-Star champion. He had an impressive career finishing with a .344 batting average and with a total of 521 career home runs, and on-base percentage of .482. Nicknamed “Joltin’ Joe” and “The Yankee Clipper,” New York Yankee hero Joe DiMaggio’s numbers alone make him deserving of the top 10 spot. His most famous achievement is his 56-game hitting streak, which is, as paleontologist Stephen Jay Gold remembered: “the most extraordinary thing that ever happened in American sports.” This hugely amazing record achievement has not been broken since DiMaggio’s streak ended, and probably will never be. In 1952, New York Yankees’ Mantle moved to the center field to replace DiMaggio, who retired after the 1951 season. Mantle, also dubbed “The Mick,” had 18 seasons with the Yankees. He was also instrumental in the Yankees’ 12 AL victories and 7 World Series championship wins. He holds the unbroken record in World Series home runs with a total of 18. He was also a three-time MVP, and a Triple Crown victor. As an outfielder and baseman for the St. Louis Cardinals, he played for the team for 22 seasons. He led the National League seven times; he was also NL’s MVP three times. He also led the Cardinals to three World Series crowns.

Musial, who had been a Cardinals stalwart up until his retirement, finished 17 of his 22 seasons with a batting average of .300. Musial was also an All-Star twenty-four times. He is one of the only four players who share the same record of 12 walk-off home runs during his active career span. Dubbed “The Georgia Peach,” Ty Cobb was the outfielder and first baseman for the Detroit Tigers, and finally for the Philadelphia Athletics in his 24-season career. His most momentous year was 1911, where he hit a 40-game hitting streak to win for the AL batting title over “Shoeless” Joe Jackson.

Cobb tallied a total of 4,191 career hits, only to be broken by Pete Rose years later. Cobb also won a dozen American League batting titles, including amazing nine straight wins. Speaking of streaks, he finished his 23 straight seasons batting an average of .300 or higher — a major league record that has yet to outdone. Centerfielder Willie Mays’ most historic moment in his baseball career is certainly his famed “The Catch” while he was with the San Francisco Giants. It was an over-the-shoulder running catch off the long fly ball bat by Cleveland Indian’s Vic Wertz in Game 1 of the World Series in 1954. This amazing grab by Mays prevented the Indians from scoring and keeping the game at a tie. The series was eventually won by the Giants.

Mays also won 12 Golden Gloves, and was inducted into the All-Star selection 24 times. He also was the first player to gather 3,000 hits and 500 home runs. The Texas Ranger righty’s highlight of his career was in 1991, when he pitched the seventh no-hitter versus the Toronto Blue Jays in their Arlington match. His seven no-hitters made him an all-time leader in this department. His hard-throwing pitches were normally recorded beyond 100 mph, which is really fast. That’s why Ryan posed a bit of a threat among other baseball pitchers as well as his opponents. Ryan also tallied a total of 5,714 strikeouts, a record which has yet to be beaten by any other player since. Outfielder Hank “Hammerin’ Hank” Aaron surpassed Babe Ruth’s career home run record with home run #715, on April 8, 1974. He scored a total career-high 755 home runs, and no one has surpassed that record as of yet. He also made history as the last Negro league player to play for major leagues. He also won three Golden Glove awards, a testament that he’s also pretty comfortable with the leather.

We may possibly do a writing on them for the next list:

The Legends of the Game