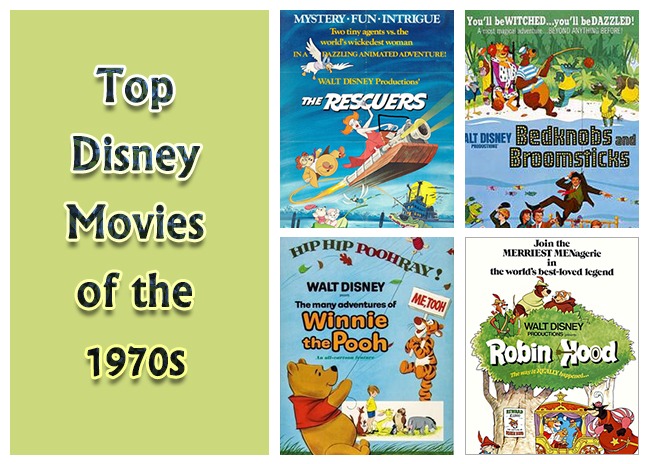 The ‘70s was a great decade for Disney films. They released numerous classic films that helped shape the minds and ignited the imagination of their audiences such as The Aristocats, The Rescuers, and Bedknobs and Broomsticks. Let’s take a look at the top Disney movies of the ’70s and reminisce the good old days.

The Aristocats is an animated romantic comedy, adventure, and musical film that was released in 1970. It is the 20th animated film that Disney released. It is directed by Wolfgang Reitherman and it featured the voices of Eva Gabor, Sterling Holloway, Phil Harris, Dean Clark, Roddy Maude-Roxby, and Scatman Crothers. The Aristocats is about a family of aristocratic cats who was kidnapped by their butler to gain his mistress’s money and how an alley cat befriends them and helped them escape the evil butler. The Aristocrats was the last movie project that Walt Disney approved before his death in December of 1966.

Robin Hood was an animated comedy adventure film that was released in 1973. It was Disney’s 21st animated film. It was again directed by Wolfgang Reitherman and it featured the voices of Phil Harris, Peter Ustinov, Carole Shelley, Andy Devine, Monica Evans, Terry-Thomas, and Pat Buttram. Robin Hood tells the adventures of Robin Hood, his friend Little John, and the people of Nottingham as they stood against the excessive taxation rules of Prince John. Robin Hood received positive reviews during its release and critics praised the animation, voice cast and the humor of the film.

Pete’s Dragon was a live-action and animated musical, fantasy, and comedy film that was released in 1977. The movie was based on an unpublished short story with the same title by Seton I. Miller and S.S. Field. Pete’s Dragon was directed by Don Chaffey and it starred Helen Reddy, Shelley Winters, Red Buttons, Jim Dale, Jeff Conaway, Sean Marshal, and the voice of Charlie Callas. Pete’s Dragon received an Academy Award nomination for Best Original Score.

The Many Adventures of Winnie the Pooh is an animated film that was released in 1977. It was Disney’s 22nd animated feature film. The movie was such a success it produced a franchise of several sequels, TV series, toys, books, clothes, and its own attraction at Disneyland.

The Rescuers is an animated adventure, comedy, and drama film that was released in 1977 and it was Disney’s 23rd animated movie. It was directed by Wolfgang Reitherman, Art Stevens, and John Lounsbery and it featured the voices of Eva Gabor, Jim Jordan, Pat Buttram, Bob Newhart, Geraldine Page, Jeanette Nolan, and Joe Flynn. The Rescuers is about an international mouse organization named Rescue Aid Society that is located in New York City. The organization is dedicated to helping abduction victims all around the world. The story of The Rescuers is based on a series of books that was written by Margery Sharp.

Escape to Witch Mountain is a live-action fantasy film which was released in 1975. It was based on the science fiction novel of the same title by Alexander H. Key. It was directed by John Hough and it starred Ray Milland, Eddie Albert, Kim Richards, Donald Pleasence, and Ike Eisenmann. This is the first film on the Witch Mountain franchise.

The Apple Dumpling Gang was a live-action comedy western film that was released in 1975. This movie was based on a novel of the same name which was written by Jack Bickham. The Apple Dumpling Gang was directed by Norman Tokar and it starred Bill Bixby, Tim Conway, Don Knotts, Susan Clark, Slim Pickens, and Harry Morgan. This movie follows the story of a slick gambler named Russel Donovan who is tricked into taking care of orphans who eventually found gold during the California Gold Rush.

Freaky Friday was a liv- action fantasy comedy film that premiered on December 17, 1976. It was directed by Gary Nelson and it starred Jodie Foster, John Astin, and Barbara Harris. Freaky Friday is about a mother and daughter who switched bodies to understand each other’s lives. The movie received positive feedback from critics and it performed well in the box office. It also received three Golden Globe nominations including Best Actress in Comedy or Musical and Best Original Song.

Return to Witch Mountain was released in 1978 as a sequel to Escape to Witch Mountain. It was directed by John Hough and actors Alexander Key, Kim Richards, and Ike Eisenmann returned to their roles as Uncle Bene, Tony, and Tia. The two main villains in the movie were portrayed by Bette Davis as Letha Wedge who is a greedy woman who uses her wealth to finance the evil scientific experiments of Dr. Victor Gannon who was portrayed by Christopher Lee.

These are the top Disney movies of the ‘70s. Which one is your favorite?